In the two-sample inference chapter, we considered the comparisons of two independent group means using the Independent T-test. Now, we expand our inference methods to study and compare k independent samples. In this case, we will be decomposing the entire variation in the data into (independent/orthogonal) components - i.e., we'll be analyzing the variance of the data. Hence, this procedure called Analysis of Variance (ANOVA).

Suppose 5 varieties of peas are currently being tested by a large agribusiness cooperative to determine which is best suited for production. A field was divided into 20 plots, with each variety of peas planted in four plots. The yields (in bushels of peas) produced from each plot are shown in two identical forms in the tables below.

Using the SOCR Charts (see SOCR Box-and-Whisker Plot Activity and Dot Plot Activity), we can generate plots that enable us to compare visually the yields of the 5 different types peas. 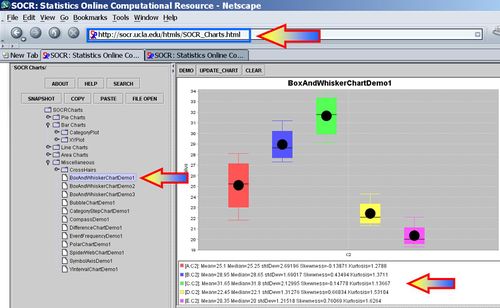 Repeated T-tests would mean testing hull hypotheses of the type \(H_o: \mu_i = \mu_j, \forall i\not= j\). What is the problem with this approach? Suppose each test is carried out at \(\alpha = 0.05\), so a type I error is 5% for each test. Then, the overall risk of a type I error is larger than 0.05 and gets much larger as the number of groups (k) gets larger. To solve this problem, we need to make multiple comparisons with an overall error of \(\alpha = 0.05\) (or whichever level is specified initially).

The main idea behind ANOVA is that we need to know how much inherent variability there is in the data before we can judge whether there is a difference in the sample means - i.e., presence of a grouping effect. To make an inference about means we compare two types of variability:

Variability within each group

It is very important that we keep these two types of variability in mind as we work through the following formulas. It is our goal to come up with a numerical recipe that describes/computes each of these variabilities.

Let's make the following notation: \[y_{i,j}\] = the measurement from group i, observation-index j.

Mean Sum Square due to Treatment (Between): c This measures variability between the sample means.

Second, we assess the within group variation. Recall that to measure the variability within a single sample we used\[\sqrt{\sum_{i=1}^n{(y_i - \bar{y})^2} \over n-1}\]. In ANOVA to describe the combined variation within the k groups we use sums of squares due to error (within-group variation):

(Verbal): Deviation of an observation from the grand mean (Total variability) = Variation-Within + Variation_Between!

SOCR Analyses provide the tools to compute the 1-way ANOVA. For example, the ANOVA for the peas data above may be easily computed - see the image below. Note that SOCR ANOVA requires the data to be entered in this format: 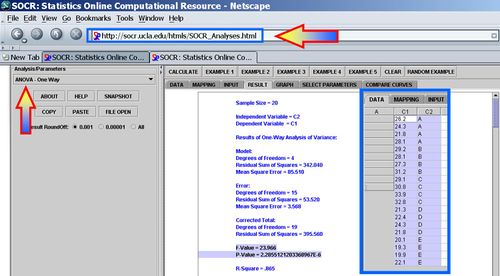 This example is provided as a hands-on demonstration of the calculations performed in 1-way ANOVA. Clearly the value added by this example is conceptual understanding and appreciation of the methodological protocol for computing critical values and probabilities in ANOVA designs.

Now use the ANOVA table to calculate the F-statistics and the corresponding p-value. Then use SOCR Analyses (ANOVA) to validate your manual calculations. 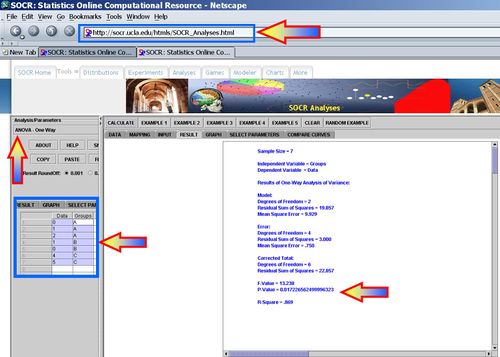 Parents are frequently concerned when their child seems slow to begin walking. In 1972, Science reported on an experiment in which the effects of several different treatments on the age at which a child’s first walks were compared. Children in the first group were given special walking exercises for 12 minutes daily beginning at the age 1 week and lasting 7 weeks. The second group of children received daily exercises, but not the walking exercises administered to the first group. The third and forth groups received no special treatment and differed only in that the third group’s progress was checked weekly and the forth was checked only at the end of the study. Observations on age (months) when the child began to walk are on the next slide. 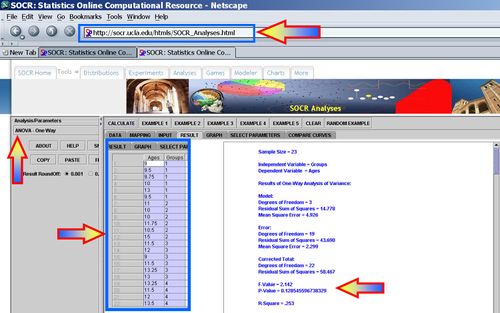 ANOVA is valid if: