Suppose one expects to see 40 shooting stars per hour at night (by observing at a specific location and not using visual enhencers). Assume that the process of observing arrivals (shooting stars) is \(Poisson(\lambda=40)\). 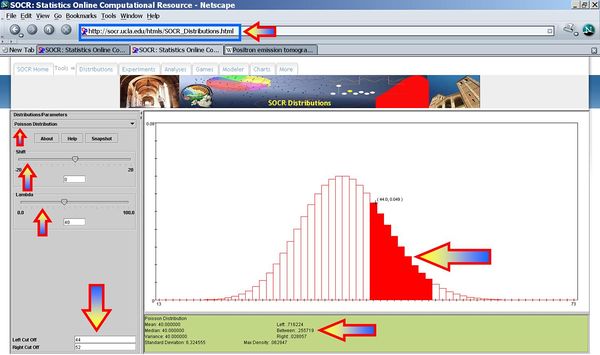 Poisson as a Limiting Case of Binomial Distribution

In several of the above examples, the events being counted are actually the outcomes of discrete trials, and would more precisely be modeled using the Binomial Distribution. However, the Binomial Distribution with parameters n (number of trials) and \(p={\lambda \over n}\) (probability of success). That is, Binomial approaches the Poisson distribution with expected value \(\lambda=p\times n\), as n approaches infinity. It provides a means to approximate Binomial random variables (for large n) using the Poisson distribution. The details of this approximation are below:

\[\lim_{n\rightarrow\infty} np_n = \lambda,\] the sequence convergence (in distribution) to a Poisson random variable with mean λ.