The funding agency poses the most important question: Can we predict how much variation (i.e., discrepancy) there will be among the 10 lab averages, if we had only been able to fund/conduct one experiment at one site (due to resource/budgetary limitations)? In other words, if the sponsoring organization could only support one lab to carry out the experiment, can they estimate what are the possible errors that may be committed by using the sample average (of 100 samples) obtained from the chosen lab?

The Central Limit Theorem (CLT) argues that the distribution of the sum or average of independent observations from the same random process (with finite mean and variance), will be approximately Normally distributed (i.e., bell-shaped curve). That is, the CLT expresses the fact that any sum or average of (many) independent and identically-distributed random variables will tend to be distributed according to a particular Attractor Distribution; the Normal Distribution effectively represents the core of the universe of all (nice) distributions. 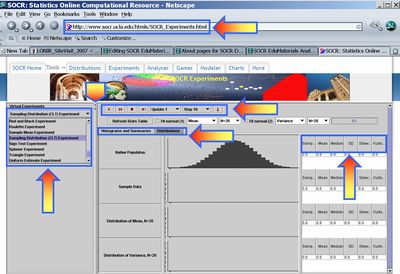