Suppose we conduct independently the same experiment over and over again. And assume we are interested in the relative frequency of occurrence of one event whose probability to be observed at each experiment is p. Then the ratio of the observed frequency of that event to the total number of repetitions converges towards p as the number of (identical and independent) experiments increases. This is an informal statement of the Law of Large Numbers (LLN).

It is generally necessary to draw the parallels between the formal LLN statements (in terms of sample averages) and the frequent interpretations of the LLN (in terms of probabilities of various events). Suppose we observe the same process independently multiple times. Assume a binarized (dichotomous) function of the outcome of each trial is of interest (e.g., failure may denote the event that the continuous voltage measure < 0.5V, and the complement, success, that voltage ≥ 0.5V – this is the situation in electronic chips which binarize electric currents to 0 or 1). Researchers are often interested in the event of observing a success at a given trial or the number of successes in an experiment consisting of multiple trials. Let’s denote p=P(success) at each trial. Then, the ratio of the total number of successes to the number of trials (n) is the average \(\overline{X_n}={1\over n}\sum_{i=1}^n{X_i}\), where \(X_i = \begin{cases}0,& \texttt{failure},\\ 1,& \texttt{success}.\end{cases}\) represents the outcome of the ith trial. Thus, \(\overline{X_n}=\hat{p}\), the ratio of the observed frequency of that event to the total number of repetitions, estimates the true p=P(success). Therefore, \(\hat{p}\) converges towards p as the number of (identical and independent) trials increases. 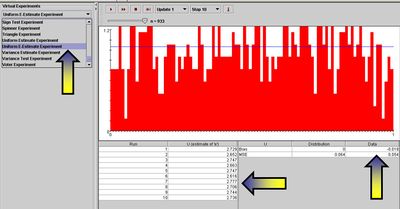