As we discussed in the paired case, non-parametric statistical methods provide alternatives to the (standard) parametric tests that we saw earlier, and they are applicable when the distribution of the data is unknown.

Nine observations of surface soil pH were made at two different (independent) locations. Does the data suggest that the true mean soil pH values differ for the two locations? Note that there is no pairing in this design, even though this is a balanced design with 9 observations in each (independent) group. Test using \(\alpha = 0.05\), and be sure to check any necessary assumptions for the validity of your test.

We see the clear analogy of this study design to the independent 2-sample designs we saw before. However, if we were to plot these data we can see that their distributions may be different or not even symmetric, unimodal and bell-shaped (i.e., not Normal). Therefore, we can not use the independent T-test to test a Null-hypothesis that the centers of the two distributions (that the 2 samples came from) are identical, using this parametric test. 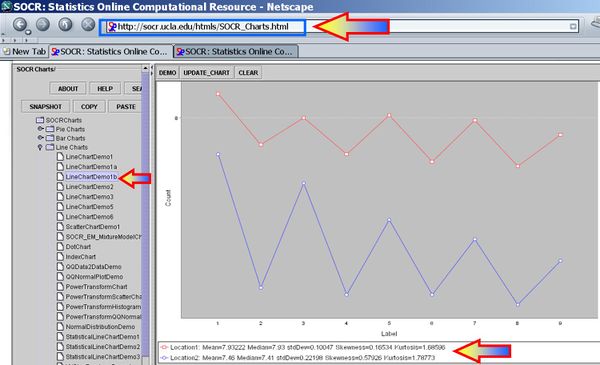 The first of these two figures shows the index plot of the pH levels for both samples. The second figure shows the sample histograms of these samples, which are clearly not Normal-like. Therefore, the independent T-test would not be appropriate to analyze these data.

Intuitively, we may consider these group differences significantly large, especially if we look at the Box-and-whisker plots, but this is a qualitative inference that demands a more quantitative statistical analysis that can back up our intuition.

The U statistic for the WMW test may be approximated for sample sizes above about 20 using the Normal distribution.

The U test is provided as part of SOCR Analyses - see this activity.

For small samples, we can directly compute the WMW test-statistic as follows.

For larger samples, a formula can be used:

where n1 is the two sample size for Sample 1, and R1 is the sum of the ranks in Sample 1.

The maximum value of U is the product of the sample sizes for the two samples. In such a case, the "other" U would be 0.

It is much quicker to use SOCR Analyses to compute the statistical significance of the sign test. This SOCR Wilcoxon-Mann-Whitney Test activity may also be helpful in understanding how to use this test in SOCR. We have the following results for the pH data above: 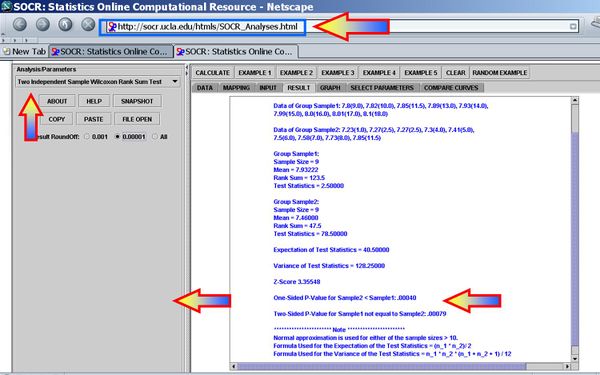 Clearly the p-value < 0.05, and therefore our data provides sufficient evidence to reject the null hypothesis and therefore assume that there were significant pH differences between the two soil lots tested in this experiment..

Both types of tests answer the same question, but treat data differently.

Positive: doesn’t depend on normality or population parameters
Negative: distribution free lacks power because it doesn't use all the info in the data

Positive : Incorporates all of the data into calculations
Negative : Must meet normality assumption