Currently, there is no evidence that the ancient Greeks or the Romans had any interests or pursued the notion of predicting future likelihoods, probabilities, outcome chances, or odds. The first recorded attempts to develop a theory describing future events was driven by examining gambling games during hte early Renaissance. In 1550, an Italian polymath Gerolamo Cardano (1501-1576) wrote a paper addressing the chance of certain outcomes in rolls of dice, which presented the first definition of probability. This manuscript was only in 1576 and then printed in 1663.

The next substantial contributions to probability theory was a letter exchange by Blaise Pascal (1623-1662) and Pierre de Fermat (1601-1665). Pascal and Fermat discussed a gambling problem proposed in 1654 by Chevalier de Mere, which examined the fundamentals of probability theory. The key question related to the number of experiments required to ensure obtaining a total sum of 6 when rolling two fair hexagonal dice. The letter correspondence between Pascal and Fermat led to the formulation of probability and expectation.

The most popular modern probability theory foundation (as there are many alternative axiomatic definitions) was laid out by Andrey Kolmogorov, who defined the notion of sample space and proposed an axiomatic system for probability theory, and Richard von Mises, who tied in measure theory.

Probability theory plays a role in all studies of natural processes across scientific disciplines. The need for a theoretical probabilistic foundation is obvious since natural variation affects all measurements, observations and findings about different phenomena. Probability theory provides the basic techniques for statistical inference.

A simple random sample of n items is a sample in which every member of the population has an equal chance of being selected and the members of the sample are chosen independently.

When studying the behavior of coin tosses, the law of large numbers implies that the relative proportion (relative frequency) of heads-to-tails in a coin toss experiment becomes more and more stable as the number of tosses increases. This regards to the relative frequencies, not absolute counts of heads and tails.

Where do the outcomes and the probabilities come from?

The Birthday Paradox Experiment provides an interesting illustration of some of the fundamental probability concepts.

In a random group of N people, what is the probability, P, that at least two people have the same birthday?

The reason for such high probability is that any of the 23 people can compare their birthday with any other one, not just you comparing your birthday to anybody else’s.

Each of the three boxes below contains two types of balls (Red and Green). Box 1 has 4 Red and 3 Green balls, box 2 has 3 Red and 2 Green balls, and box 3 has 2 Red and 1 Green balls. All balls are identical except for their labels. Which of the three boxes do you most likely to draw a Red ball from? In other words, if a randomly drawn ball is known to be Red, which box is the one that we most likely draw the ball out of? 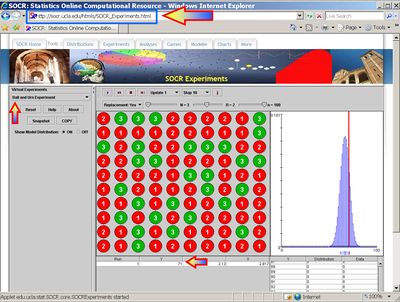 From these empirical tests, we can propose that a Red ball is most likely to be drawn from Box 3. Again, remember that these simulations will produce different results each time we do the experiments. However, the expected means (expected number of Red balls in sample of 100), which are reported in the bottom-right tables (for each box setting), indicate this conclusion more reliably. These expected Red ball counts for the 3 boxes are 57.14, 60.0 and 66.67, respectively.

For each of these hands-on interactive experiments discuss the sample space, probabilities, events of interest, event operations, and how to compute theoretically and empirically the probabilities of these events.