Difference between revisions of "SMHS DecisionTheory"

Decision theory is concerned with determining the optimal course of action when a number of alternatives, whose consequences cannot be forecasted with certainty, are present. Namely, decision theory is method to make decisions in the presence of statistical knowledge when some uncertainties are involved. In this section, we present an introduction to decision theory and illustrate its application with specific examples. Sample R codes will also be provided to help apply decision theory in the programming background.

Suppose a drug company is deciding whether they should market a new drug. Two of the main factors to consider including the proportion of people for which the drug will prove effective $(\theta_{1})$ and the proportion of the market the drug will capture ($\theta_{2})$. Both of these two factors are generally unknown even with experiments conducted to obtain statistical information about them. This kind of problem is one of the application where decision theory in that ultimate purpose is to decide whether to market the drug and how much to market and questions like this. So, what is decision theory and how does it work?

Note that an overestimate of demand is considered twice as costly as an underestimate of demand, and that otherwise the loss is linear in the error. We could perform a sample survey to get reasonable information about $\theta_{2}$. For example, assume n people are interviewed and the number $X$ who would buy the drug is observed. It might be reasonable to assume that $X$ is $B(n,\theta_{2})$, which has density function $f(x│θ_{2})={n\choose x} \theta_{2}^{x} (1-\theta_{2} )^{n-x}$. There could well be considerable prior information about $\theta_{2}$ arising from previous introductions of new similar drugs into the market. Assume new drugs tend to capture between $\frac{1}{10}$ and $\frac{1}{5}$ of the market with all values between $\frac{1} {10}$ and $\frac{1}{5}$ being equally likely. This prior information could be modeled by giving $\theta_{2}$ a $U(0.1,0.2)$ prior density, i.e. letting $\pi(\theta_{2})=10I_{(0.1,0.2)}\theta_{2}$. The above estimates of $L$, $f$, and $\pi$ are quite crude and usually much more detailed constructions are required to obtain satisfactory results. The techniques for doing this will be developed as we proceed.

With the example of the drug evaluation given above, assume no data is obtained, so that the believed distribution of $\theta_{2}$ is simply

You can try the following R code: 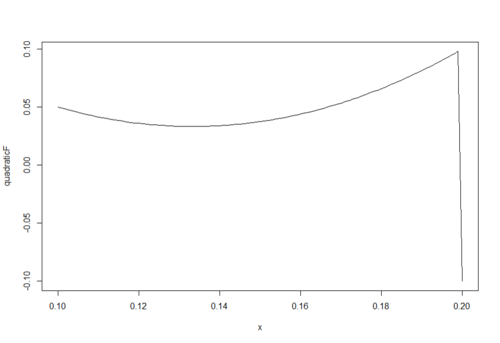 A pharmaceutical company purchases raw chemicals necessary to manufacture certain drugs $\$$0.89 and sells the drugs for $\$$1.39 (per unit). Any drugs unsold by the expiration date are disposed of at a price of $\$$0.39 (per unit). Assume the probability distribution of the drug demand by consumers is as follows: <center> {| class="wikitable" style="text-align:center; width:35%" border="1" |- |Demand x ||Probability p(x) |- |50|| 0.15 |- |60|| 0.25 |- |70|| 0.20 |- |80|| 0.15 |- |90|| 010 |- |100|| 0.08 |- |110 ||0.07 |} </center> (1) Let's assume that there is no goodwill loss (from patients) associated with the drug being out of stock, how many units of the drug should be manufactured by the company to minimize the potential loss? (2) If the goodwill loss is 0.20 per unit of unsatisfied demand, how many units should be produced? (3) If the company traditionally makes 80 units of the drug (for a given period). When shown the answer to (1) above, the pharmaceutical company execs state that a goodwill cost for being out of stock has been incorporated. What is the implicit per unit goodwill cost associated with the inventory policy of 80 units? (4) In a given decision problem, the cost of act $i$ is $ c_{i}(x)= (x - a_{i} )^{2},(i = 1,2,...,n)$. In words, the cost is a quadratic function of $x$, and $a_{i}$ are known constants. Show that the optimum act is the one that minimizes $(\mu- a_{i})^{2}$. A problem frequently faced by production departments concerns the number of items that must be scheduled for production in order to fill an order for a specified number of items. Each item may be good or defective, and there is uncertainty about the total number of good items in the production run. If too few items are produced, there may not be enough good items to fill the order; if too many items are produced, there may be more good items available than are required and the surplus items will be wasted. As a simple illustration, consider the case of a production manager who has an order for 5 units of a particular product. The cost of setting up a production run is $\$$150 regardless of the size of the run. The variable manufacturing cost amounts to $\$$20 per unit produced. For a number of reasons, it is not possible to test each unit before the next unit is produced; rather, all the items in the run are tested at the same time, and the good items are separated from the defective ones at that stage. From past experience, the long-run fraction of defective units is estimated to be about 10$\%$. If there are fewer than 5 good units in the first run, a second run must be scheduled. The same comments apply for the second run as for the first. If the number of good units in the second run falls short of the number required, a third run may be necessary. Theoretically, a fourth, fifth, . . . , run may be required if the number of good units in three runs still falls short of the requirements. If more good units are produced in any one run than are required, the surplus good units are sold as scrap at $\$$10 per unit. Defective units are worthless.

(5) Under what conditions is it reasonable to suppose that the probability distribution of the number of good units in a run of n units is binomial with parameters n and p = 0.90? When answering the following questions, assume that these conditions are satisfied.

(6) In order to simplify the problem initially, assume that if a second run is required, it is possible to avoid having any defectives in that run by employing workers with more skill. The variable manufacturing cost in the second run will increase to $\$$40 per unit. How many units should be produced in the first run so that the expected cost per order is minimized? (7) Suppose that if a second run is needed, it will be made under the same conditions as the first. However, if a third run is required, skilled workers will be employed, there will be no defective units in this run, and the variable cost will be $\$$40 per unit. Without doing any calculations, explain how you would determine the policy that minimizes the expected cost per order.