Design of experiments is a systematic, rigorous approach to problem solving that applies principles and techniques at the data collection stage so as to ensure the generation of valid, supportable and defensible conclusions. Design of experiments can be used at the point of greatest leverage to reduce costs by speeding up the design process, reducing late engineering design changes and reducing product material and labor complexity. It is also powerful tools to achieve manufacturing costs savings by minimizing process variation and reducing rework, and the need for inspection. The lecture presents a general overview of DOE and an introduction to some fundamental concepts, objectives, steps and design guidelines to assist in conducting designed experiments.

Experiment would be the natural way to implement a study and achieve the desired objectives. So the next question is how can these experiments and studies be realized, that is we need a blueprint for planning the study or experiment including ways to collect data and to control study parameters for accuracy and consistency. What are the key factors in a process? At what settings would the process deliver acceptable performance? What are the main and interaction effects in the process and what settings would bring out less variation in the output? Design of Experiment would be the answer to those questions. Experiments can be designed in many different ways to collect the information of which process inputs have a significant impact on the process output and what the target level of those inputs should be to achieve a desired output. There are four general problem areas in which design of experiment may be applied: 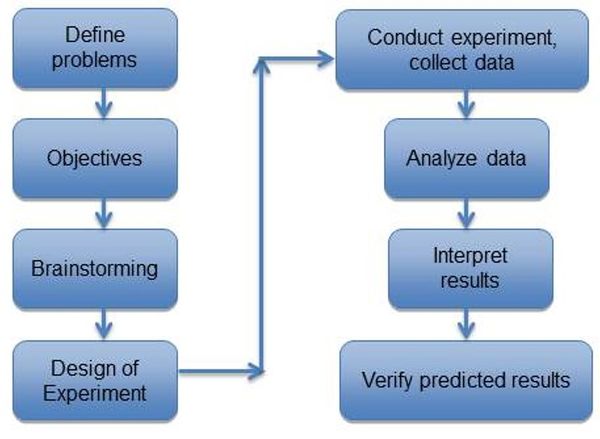 We reject the null hypothesis of equal treatment means if F_0>F_(α,a-1,a(n-1)) Note: a is the number of treatments, n_i is the size of sample in the i^th group, α is the level of significance, y_ij is the measurement from group i, observation index j, (y_(..) ) ̅ is the grand mean of all the observations, (y_(i.) ) ̅ is the grand mean f the i^th treatment group. ANOVA will be further studied in the section of ANOVA later.