1) Overview: Design of experiments is a systematic, rigorous approach to problem solving that applies principles and techniques at the data collection stage so as to ensure the generation of valid, supportable and defensible conclusions. Design of experiments can be used at the point of greatest leverage to reduce costs by speeding up the design process, reducing late engineering design changes and reducing product material and labor complexity. It is also powerful tools to achieve manufacturing costs savings by minimizing process variation and reducing rework, and the need for inspection. The lecture presents a general overview of DOE and an introduction to some fundamental concepts, objectives, steps and design guidelines to assist in conducting designed experiments.

2) Motivation: Experiment would be the natural way to implement a study and achieve the desired objectives. So the next question is how can these experiments and studies be realized, that is we need a blueprint for planning the study or experiment including ways to collect data and to control study parameters for accuracy and consistency. What are the key factors in a process? At what settings would the process deliver acceptable performance? What are the main and interaction effects in the process and what settings would bring out less variation in the output? Design of Experiment would be the answer to those questions. Experiments can be designed in many different ways to collect the information of which process inputs have a significant impact on the process output and what the target level of those inputs should be to achieve a desired output. There are four general problem areas in which design of experiment may be applied:

3.1) The most common components in design of experiments:

3.4) DOE guidelines: address the questions outlined above by stipulating factors to be tested, levels of the factors and structure and layout of experimental conditions. To sum up, DOE aims to come up with an experiment that can obtain the required information in a cost effective and reproducible manner. 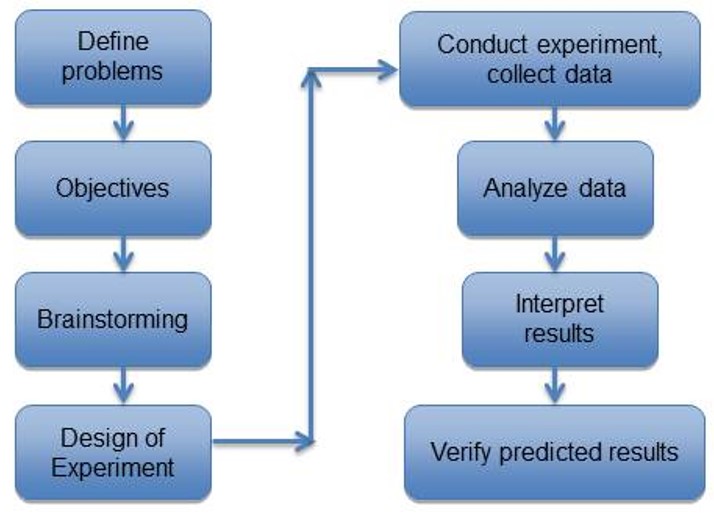 3.6) Test of means – one factor experiment: One of the most common types of experiments is the comparison of two process methods, or two methods of treatment. One of the most straightforward methods to evaluate a new process method is to plot the results on an SPC chart that also includes historical data from the baseline process, with established control limits. Then apply the standard rules to evaluate out-of-control conditions to see if the process has been shifted. You may need to collect several subgroups worth of data in order to make a determination, although a single subgroup could fall outside of the existing control limits. An alternative way to control chart approach is to use F-test to compare the means of alternate treatments and this is done automatically with ANOVA (analysis of variance). Consider the following example where three treatments are analyzed with the following data:

We reject the null hypothesis of equal treatment means if F_0>F_(α,a-1,a(n-1)) Note: a is the number of treatments, n_i is the size of sample in the i^th group, α is the level of significance, y_ij is the measurement from group i, observation index j, (y_(..) ) ̅ is the grand mean of all the observations, (y_(i.) ) ̅ is the grand mean f the i^th treatment group. ANOVA will be further studied in the section of ANOVA later.

(a) No, only researcher 2 can conclude this.

(b) No, only researcher 1 can conclude this.

(c) Yes, because aspirin is known to reduce heart attacks.

(d) Yes, because aspirin users had a larger heart attack rate in both studies.

6.2) Suppose that you were hired as a statistical consultant to design a study to examine the impact of a new medicine vs. a current medicine on lowering blood pressure. 50 patients volunteer to participate in the study. What design will you recommend?

(b) Completely randomized design with two factors and single blind.

6.3 – 6.6 are based on the following: Hospital floors are usually covered by bare tiles. Carpets would cut down on noise but might be more likely to harbor germs. To study this possibility, investigators randomly assigned 8 of 16 available hospital rooms to have carpet installed. The others were left bare. Later, air from each room was pumped over a dish of agar. The dish was incubated for a fixed period, and the number of bacteria colonies was counted.

6.3) Select the appropriate statistical term for the 8 rooms left bare.

6.4) Select the appropriate statistical term for the 16 hospital rooms.

6.5) Select the appropriate statistical term for number of colonies in a dish.

6.6) Select the appropriate statistical term for number of colonies in a dish.

6.7) A psychologist is examining the effect of showing pictures on learning of words by seven-year-olds. The seven-year-olds are randomly assigned to two groups. The experimental group is shown the word along with the picture. The control group is shown only the word. At the end of the experiment, the subjects are given a test on the number of words they get right. This is an example of:

(a) A blind study

(b) An experiment with a design flaw

(a) Student A is doing descriptive statistics and student B is doing inferential statistics.

(b) Student A is doing inferential statistics and student B is doing descriptive statistics.

6.9) At the Department of Statistics, we intend to examine the effect of using computers in Statistics 10 on the attitudes of students toward statistics. We offer ten lectures of Statistics 10 in an academic year. Five of these sections are randomly assigned to the experimental group and the other five are assigned to the control group. The experimental group will go to lecture, section, and computer lab. The control group will only go to lecture and section, but will not do the computer lab. The attitude of the students toward statistics is measured before and after the course. This study is:

(a) A double blind study

(b) A well-designed experiment

(d) Not a randomized experiment

(a) We need more information to decide

(b) This is an experimental study

(c) This is an observational study

(d) This is a combination of experimental and observational study

6.11) A major car manufacturing company intends to find out if cars get better millage with premium instead of regular unleaded gasoline. They also would like to know if the size of the car has any effect on fuel economy. 96 volunteers who are similar in age, experience and style of driving participate in the study. The drivers are randomly assigned to the premium and regular groups. The drivers assigned to the premium and regular groups are then randomly assigned to drive a small, medium, or large car. All of the drivers are asked to keep a driving log. What is the design used for this study?

6.12) For this research situation, decide what statistical procedure would most likely be used to answer the research question posed. Assume all assumptions have been met for using the procedure. Is ethnicity related to political party affiliation (Republican, Democrat, Other)?

(a) Test the difference in means between two paired or dependent samples.

(b) Use a chi-squared test of association.

(c) Test one mean against a hypothesized constant.

(e) Test for a difference in more than two means (one way ANOVA).

6.13) In a large mid-western university with 30 different departments, the university is considering eliminating standardized scores from their admission requirements. The university wants to find out whether the students agree with this plan. They decide to randomly select 100 students from each department, send them a survey, and follow up with a phone call if they do not return the survey within a week. What kind of sampling plan did they use?