Difference between revisions of "SMHS IntroEpi"

Person time is a way to measure the amount of time all individuals in a study spend at risk. For example, if subject A is followed for 3 days, subject B is followed for 5 days and C for 8 days then person-days = 3 + 5 + 8 = 16.

Screening is the use of testing to sort out apparently well persons (asymptomatic) who probably have disease from those who probably do not and allows to detect the disease early. Examples of screening include: fasting blood sugar for diabetes, bone densitometry for osteoporosis and Otoacoustic emissions testing for hearing loss in new borns. It is done during the preclinical phase and is a secondary prevention strategy. Screening increases lead time, thereby allows us to detect disease early, initiate treatment sooner and provide better outcomes. However, it is critical that screening programs must be warranted and there must be a critical point that can be preceded by screening.

If a patient is tested positive, the likelihood they actually have the disease is called Positive Predictive Value (PPV), if a patient tests negative, the likelihood they actually do not have the disease is called Negative Predictive Value (NPV). PPV and NPV are affected by prevalence of disease, specificity and sensitivity of the test.

Validity is the ability of a test to distinguish between who has disease and who does not; reliability is the ability to replicate results on same sample if test if repeated. The following charts shows the three possible outcomes: (from left to right) valid not reliable, reliable not valid and valid and reliable.

The investigator assigns exposure at random to study participants, investigator then observes if there are differences in health outcomes between people who were (treatment group) and were not (comparison group) exposed to the facto. Special care is taken in ensuring that the follow-up is done in an identical way in both groups. The essence of good comparison between “treatment” is that the compared groups are the same except for the “treatment”.

Interpretation: RR>1, The risk of X is RR times more likely to occur in group A than in group B; RR=1, Null value (no difference between groups); RR<1, Either calculate the reduction in risk ratios (100%-xx%) or invert (1/RR) to be interpreted as “less likely” risk.

An ecological study is an observational study in which group-level data is used for the exposure and/or the outcome. Subjects can be grouped by place (multiple-group study); by time (time-trend study); by place & time (mixed study). An error that could occur when an association identified based on group level (ecologic) characteristics are ascribed to individuals when such association do not exist at the individual level. 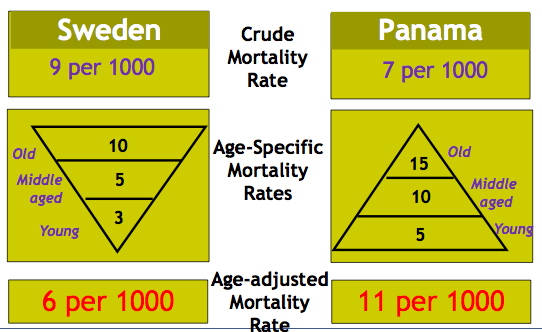 a. cases call health departments directly
b. clinicians
c. laboratories
d. all of the above

a. host
b. agent
c. vector
d. environment
e. all of the above

Understanding health behaviors that may protect against infection with the flu in population-dense areas is of great interest to epidemiologists. To determine if proper hand washing may prevent flu transmission, investigators recruited 834 students from a university dormitory to participate in a research study. At baseline, 74 individuals were experiencing flu-like symptoms and tested positive for active antibodies against the flu virus (meaning they in fact, had the flu) and thus, were not enrolled in the research study. The students that were not ill with the flu at baseline were followed for 12 months with no loss to follow-up. Researchers asked students to contact the study team when they exhibited flu-like symptoms so that they could be tested for the flu virus. During the course of follow-up, 379 students were diagnosed with the flu. Of the students enrolled in this study, 60% reported improper hand-washing behaviors. Of the students that were diagnosed with the flu during follow-up, 280 of them reported improper hand-washing.

a. What type of study is this?
b. Why is this type of study adequate for this particular situation?
c. Imagine that you are the investigator picking the appropriate study design to answer this question, what might you have worried about in picking this design?
d. What is the best measure of association to test the relationship between hand washing and incident flu? Why?
e. Calculate and interpret the above measure of association using a 2X2 table.
f. If proper hand-washing behavior were to be used by the students who exhibited improper hand-washing techniques, how many cases per 1000 would be prevented? Interpret your findings.

Using data from the Nurses Health Study, the association between self-reported frequency of sunburns and melanoma was examined. When questioned after the diagnosis of melanoma, some women with melanoma may have exaggerated their frequency of sunburns especially if they were concerned that sun exposure was a reason they got melanoma. This is an example of: