Difference between revisions of "SMHS LongitudinalData"

3.1) Longitudinal data: data collected from a large population over a given time period where the same subjects are measured at multiple points in time.

3.2) Longitudinal study: an investigation where participant outcomes and possibly treatments or exposures are collected at multiple follow-up times. It generally yields multiple (repeated) measurements on each subject, which are correlated within subjects and thus require special statistical techniques for analysis and inference. In longitudinal study, we may also be interested in measuring the time until a key clinical event such as time to death, where survival analysis is generally applied for analysis.

3.3) Notations: use Y_{ij} to denote the outcome measured on subject i at time t_{ij}, where i =1, \cdots, N is index for subject, and j = 1, \cdots, n is index for observations within a subject. The measurement time follows a common set of follow-up times t_{ij} = t_{j}. Use X_{ij} to denote covariates associated with observations Y_{ij}. Common covariates in a longitudinal study include the time, t_{ij}, and person-level characteristics such as age, treatment assignments, and etc. In many cases, the scientific studies focus on mean responses as a function of covariates such as treatment and time, we can also make statistical inference on within-person correlation of observation. Define \rho_{jk} = corr(Y_{ij}, Y_{ik}), the within-subject correlation between observations at time t_{j} and t_{k}.

3.4) Exploratory data analysis: to discover patterns of systematic variation across groups, as well as aspects of random variation among individual patients.

4.1) This article (http://biomet.oxfordjournals.org/content/73/1/13.short) proposed an extension of generalized linear models to the analysis of longitudinal data. This paper introduced a class of estimating equations that give consistent estimates of the regression parameters and of their variance under mild assumptions about the time dependence. The estimating equations were derived without specifying the joint distribution of a subject's observations yet they reduce to the score equations for multivariate Gaussian outcomes. Asymptotic theory was presented for the general class of estimators. Specific cases in which are assumed independence, m-dependence and exchangeable correlation structures from each subject were discussed. Efficiency of the proposed estimators in two simple situations was considered.

4.2) This article (http://onlinelibrary.wiley.com/doi/10.1002/sim.4780111406/abstract;jsessionid=0538E29F4FDDD9D0DD3D672621073EA7.f03t03?deniedAccessCustomisedMessage=&userIsAuthenticated=false) reviewed statistical methods for the analysis of discrete and continuous longitudinal data. The relative merits of longitudinal and cross-sectional studies were discussed. Three approaches, marginal, transition and random effects models, were presented with emphasis on the distinct interpretations of their coefficients in the discrete data case. This paper reviewed generalized estimating equations for inferences about marginal models. The ideas were illustrated with analyses of a 2 × 2 crossover trial with binary responses and a randomized longitudinal study with a count outcome.

5) Software In R: package of ‘longitudinal’ 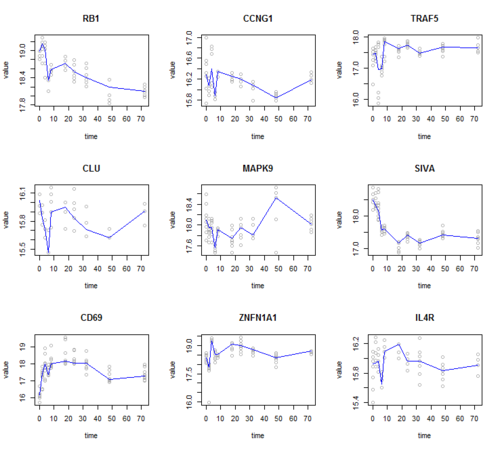