Receiver operating characteristic (ROC curve) is a graphical plot, which illustrates the performance of a binary classifier system as its discrimination threshold varies. The ROC curve is created by plotting the fraction of true positive out of the total actual positives vs. the fraction of false positives out of the total actual negatives at various threshold settings. In this section, we are going to introduce the ROC curve and illustrate applications of this method with examples.

We have talked about the cases with a binary classification where the outcomes are either absent or present and the test results are positive or negative. We have also previously discussed sensitivity and specificity which are associated with the concepts of true positive and true negatives. With ROC curve, we are looking to demonstrate the following aspects:

Review of basic concepts in a binary classification:

Sensitivity and specificity are both characteristics of a test but they also depend on the definition of what constitutes an abnormal test. Consider a diagnostic medical test where the cut-points would without doubt influence the test results. We can use the hypothyroidism data from the likelihood ratio to illustrate how these two characteristics change depending on the choice of T4 level that defines hypothyroidism. Recall the data where patients with suspected hypothyroidism are reported.

With the following cut-points, we have the data listed:

Now suppose, we decided to be less stringent on the disease and consider the patients with T4 values of 7 or less to be hypothyroid, then the data would be recorded as the following and the sensitivity in this case would be 0.78 and specificity 0.81:

If we move the cut-point for hypothyroidism a little bit higher, say 9, we would have the sensitivity of 0.91 and specificity 0.42:

To sum up, we have the pairs of sensitivity an specificity with corresponding cut-points in the following table:

Plotting the sensitivity vs. (1-specificity), we get the ROC curve: 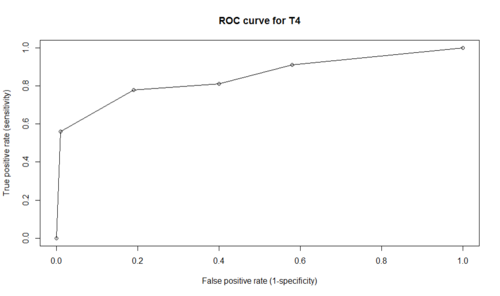 With our example above, the area under the T4 ROC curve is 0.86, which shows that the accuracy of the test is good in separating hypothyroid from euthyroid patients.

We can use the smaller summary Alzheimer's disease (AD) dataset of Global Gray Matter Volume (GMV) and Cortical Surface Curvedness morphometry measures to illustrate the concepts of false-positive, false-negative, sensitivity, specificity and power of a test.

Suppose we try to determine the best threshold of the GMV or the curvedness (a measure of cortical surface smoothness) that can be used as a test for AD. We would combine NC+MCI and explore the effects of varying the GMV threshold on the false-positive and false-negative rates. The table below uses these simple formulas to compute the number of false-positive ($=COUNTIF(GMVCurvednessTable!GMV29:GMV105, "<="\&A2)$, count non-AD cases with GMV$\le$threshold) and false-negative ($=COUNTIF(GMVCurvednessTable!GMV2:GMV28, ">"\&A2)$, count AD cases with GMV>threshold) frequencies for each threshold between $35\times 10^4$ and $75\times 10^4$ (in increments of $20,000$).

The figure below illustrates graphically the effect of increasing the GMV threshold (binary classification of cases into AD group or NC+MCI group) on the false-positive (red) and false-negative (blue) classification rates.

We can use a similar R-script to compute the number of:

Below is an example using the ROCR R-package to generate the ROC curve and compute the AUC. First download the data table: Alzheimer's disease (AD) dataset of Global Gray Matter Volume (GMV) and Cortical Surface Curvedness morphometry measures, as CSV file (C:\User\GMV.csv) on your hard-drive. 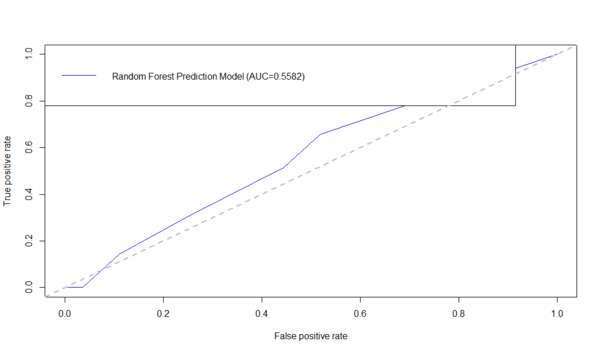 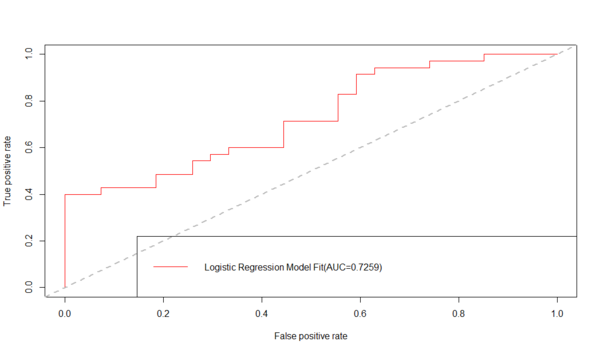 Note that in this case we only illustrated the ROC curve construction for the GMV variable, however similar analyses can be done for some of the other variables in this dataset (e.g., MMSE, CDR, TBV, GMV, WMV, CSFV, Curvedness).

6.1) Suppose that a new study is conducted on lung cancer and the following data is collected in identify between two types of lung cancers (say type a and type b). Conduct the ROC curve for this example by varying the cut-points from 2 to 10 by increasing 2 units each time. Calculate the area under the curve and interpret on the accuracy of the test.

6.2) When a serious disease can be treated if it is caught early, it is more important to have a test with high specificity than high sensitivity.

6.3) The positive predictive value of a test is calculated by dividing the number of:

(a) True positives in the population

(b) True negatives in the population

6.4) A new screening test has been developed for diabetes. The table below represents the results of the new test compared to the current gold standard.

What is the sensitivity of the test?

6.5) What is the specificity of the test?

6.6) What is the positive predictive value of the test?