Reliability and validity are two of the most commonly used criteria in choosing the ideal measurement. Reliability is the overall consistency of a measure that is the ability to produce similar results under consistent conditions. Validity is the extent to which a measurement is accurately to reflect the real fact that is the extent to which the measurement measures what it claims to measure. In the perfect situation, we would expect the measurement to be reliable and valid, though it is not always achievable. In fact, in many cases, we need to strike a balance between reliability and validity based on our objectives of the study in choosing the ideal measurement. In this section, we are going to discuss about the measurement reliability and validity and illustrate their application with examples and we are going to focus on the application of these two criteria in the field of epidemiology as an example.

In choosing an ideal measurement in the study, we are always encountered with the problem of whether it is capable of producing the similar results with consistent conditions and whether it is capable to measure what it claims to measure. Ideally, we would prefer to be able to measure the exact situation and to produce similar results when measured repeatedly in consistent conditions. In real studies, we would need to choose between measurements to strike a balance between these two aspects given the restrictions in real world. So, how do we choose between validity and reliability? How these two would influence the results of the test?

3.1) Measurement: refers to the systematic, replicable process through which the objects are quantified or classified with respect to a particular dimension and is usually achieved by assigning numerical values to the objects measured.

The following charts shows the three possible outcomes: (from left to right) valid not reliable, reliable not valid and valid and reliable. 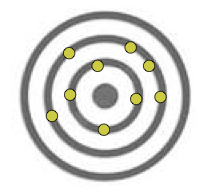 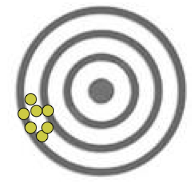 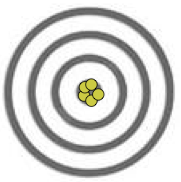 3.2) Validity: validity is the extent to which the assessment measures what it is supposed to measure while reliability is the ability to replicate results on same sample if test if repeated. Within validity, we don’t always expect the measurements to produce the similar results in repeated tests. Similarly, a measure may not be valid within reliability.

There are different types of validity:

This article presents a comprehensive introduction to measurements, validity and reliability and illustrate the concepts and application with examples. It is very well developed and would be a great introduction to the material we are going to cover in this lecture.

This article assessed the reliability and validity of the Childhood Trauma Questionnaire (CTQ), a retrospective measure of child abuse and neglect. 286drug- or alcohol-dependent patients (aged 24–68 years) were given the CTQ as part of a larger test battery, and 40 of these patients were given the questionnaire again after an interval of 2–6 months. 68 Ss were also given the Childhood Trauma Interview. Principal-components analysis of responses on the CTQ yielded 4 rotated orthogonal factors: physical and emotional abuse, emotional neglect, sexual abuse, and physical neglect. The CTQ demonstrated high internal consistency and good test-retest reliability over an interval of 2–6 months. The CTQ also demonstrated convergence with the Childhood Trauma Interview indicating that Ss' reports of child abuse and neglect based on the CTQ were highly stable, both over time and across types of instruments.

6.1) In public health practice, optimizing the validity of tests is important in order to:

b. reduce unnecessary stress for patients

c. Be able to identify opportunities for intervention early in the course of disease

d. all of the above

6.4) In a study investigating whether a new serum-based screening test for pancreatic cancer allowed for earlier detection than traditional tests, the researchers found that those who enrolled in the study were more likely to have a family history of pancreatic cancer than those who did not. This characteristic of the study population affects the study’s:

a. Sampling variability increases and the chance of selecting an unrepresentative sample increases

b. Sampling variability increases and the chance of selecting an unrepresentative sample decreases

c. Sampling variability decreases and the chance of selecting an unrepresentative sample decreases

d. Sampling variability decreases and the chance of selecting an unrepresentative sample increases