The Bertrand’s experiment generates a random chord of a circle with one point fixed at (1,0).

To provide a simple generator that displays different models that satisfy the geometric properties of a Bertrand experiment.

Go to the SOCR Experiment [[1]] and select the Bertrand’s Experiment from the drop-down list of experiments on the top left. The image below shows the initial view of this experiment: 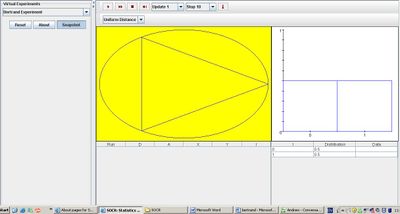 When “Uniform Distance” is selected from the list box, the density of I graph is symmetric. As the number of trials increase, the empirical density of I eventually takes the same form of the density graph. The image below demonstrates this outcome: 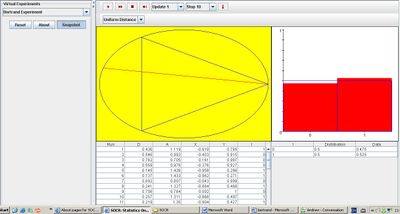 Uniform Angle When “Uniform Angle” is selected from the list box, the density of I graph is not symmetric—the density value of 0 is larger than that of 1. Similarly, as the number of trials increase, the empirical density of I eventually takes the same form of the density graph. The image below demonstrates this outcome: 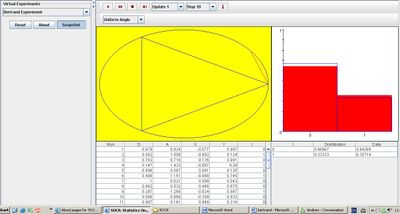 Uniform Point When “Uniform Point” is selected from the list box, the density graph shown in blue displays a much larger value for 0, thus creating a very small value for 1. This shows that the probability of a chord exceeding the length of one side of the inscribed triangle is very small. As the number of trials increase, the empirical density of I eventually takes the same form of the density graph. The image below demonstrates this outcome: 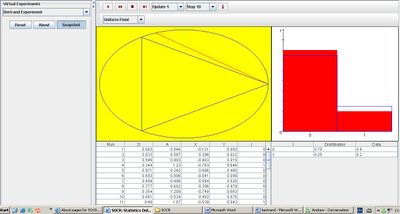 The Bertrand Experiment is an example of statistics and probability involving geometry. When selecting an experiment from the perspective of uniform point, angle, or distance, the density of variable I vary in respect.

Architectures and engineers may want to use this applet when determining the density of a randomly sampled length of material for a given sample of area. Suppose a team was given the estimated length of a rectangular room that is to be remodeled and they must find the right size length of metal to outline this chosen area. By using this java applet, the members may determine the probability of randomly selecting the interval of sizes that will fit into this room.

When using a mannequin to create new types of clothing, the size of material is usually bigger than necessary. Suppose a fashion designer is managing his budgets and wants to determine the probability of choosing the right size of material for the mannequin. After running the Bertrand Experiment many times, he concludes that randomly cutting up the material will make him lose money because the material may be too small for the mannequin, thus wasting money and material. Whereas the material will always be put to use even if it is too big.

A group of students are designing a car for their mechanics class and want to know the probability of randomly selecting a small fan for the air conditioner according to its radius.