The purpose of this experiment is to draw attention toward the behaviors of random sampling with replacement. The second part of the Birthday materials provide hands-on activities.

Go to the SOCR Experiments and select the Birthday Experiment from the drop-down list of experiments on the top left. The image below shows the initial view of this experiment: 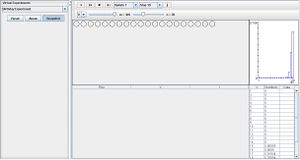 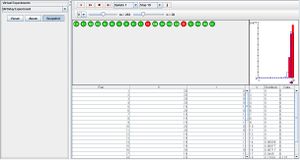 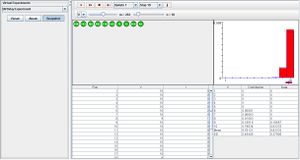 The Birthday Paradox is not a real paradox, despite the fact that its statement may initially sound a little counter-intuitive. Suppose we have a random group of N people. What is the change that at least two people have the same birthday? For example, if N=20, P(one-or-more-Birthday-matches) > 0.4. Main confusion arises from the fact that in real life we rarely meet people having the same birthday as us, and we meet more than 20 people.

The reason for such a high probability is that any of the 20 people can compare their birthday with any other one, not just you comparing your birthday to anybody else’s.

Denote by P(E) the probability of the complementary event, E = {All N birthdays are different}. Then,

The event of at least two of the N people having the same birthday is complementary to E, i.e., we are interested in the probability \(P(E^c)\), which is equal to