The Buffon’s Needle Experiment involves dropping a needle on hardwood floor with floorboards of width 1. The experiment is shown graphically in the first graph box.

The parameter is the needle length L which can be modified with the scroll bar.

To provide a simulation that describes the probability of random events and to justify hypotheses and estimations. This demonstration should provide a better understanding and knowledge regarding calculus based probability.

Go to the SOCR Experiment [[1]] and select the Buffon Needle Experiment from the drop-down list of experiments on the top left. The image below shows the initial view of this experiment: 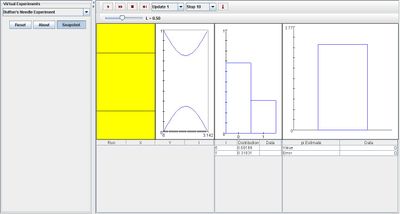 When L increases, the probability that the needle will cross a crack also increases. This is shown in the image below: 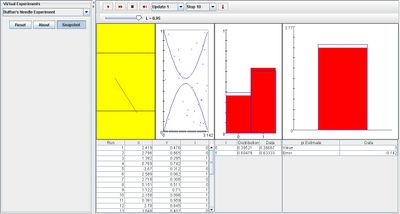 When L decreases, the probability that the needle will cross a crack also decreases. This is shown in the image below: 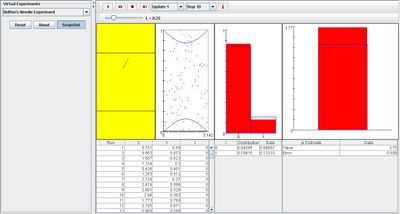 The Buffon’s Needle Experiment is a simulation that is applicable for anyone to describe calculus based probability events. This java applet may be used for many different types of activities. One example may be for throwing darts onto a dart board. When using a dart made of a fixed material, a shorter length dart will have lighter weight so it may be easier to control the dart, thus there will be a higher chance that the dart will land within the target. But a longer dart may experience more air resistance and have a heavier weight, causing the probability to land within the target to decrease.