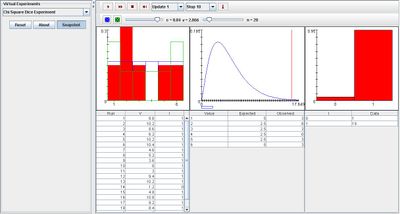 The Chi Square Dice Experiment is a general simulation that demonstrates the process of using one form of the Chi Square Test—Chi Square Test Goodness of Fit. It may also be utilized in specialty areas such as marketing. For example, it is important for a marketing manager to know whether the pattern of observed frequencies fit will with the expected values.