To provide a simulation of conditional probabilities with distribution tables and graphs. It allows the user to grasp the basic concepts of conditional events without computing numbers with the formula: P(D3 | 2H) = P(2H | D3) P(D3) / P(2H).

Go to the SOCR Experiment [[1]] and select the Die Coin Experiment from the drop-down list of experiments on the top left. The image below shows the initial view of this experiment: 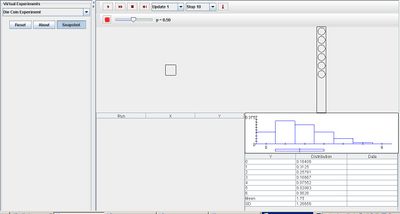