The experiment consists of selecting n balls at random (without replacement) from a population of m balls, numbered from 1 to N. For i = 1, 2, ..., n, the i'th smallest number in the sample, X(i) (the i'th order statistic), is recorded on each update. For a selected k, the distribution and moments of X(k) are shown in the distribution graph and the distribution table. The parameters m, n, and k can be varied with scroll bars

To provide a simulation of conditional probabilities with distribution tables and graphs. It allows the user to grasp the basic concepts of random events without replacement by illustrating the various outcomes with this simple demonstration.

Go to the SOCR Experiment [[1]] and select the Finite Order Statistic Experiment from the drop-down list of experiments on the top left. The image below shows the initial view of this experiment: 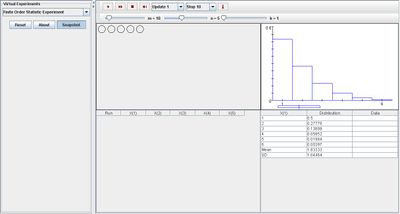 Notice that initially, the distribution graph on the right is skewed right. This occurs because parameter k is set at a very low value. When k is set to a higher value, the graph is then skewed left. 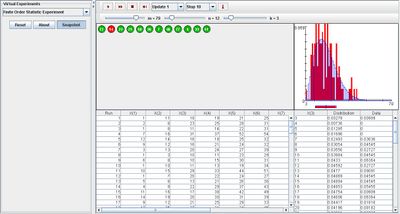 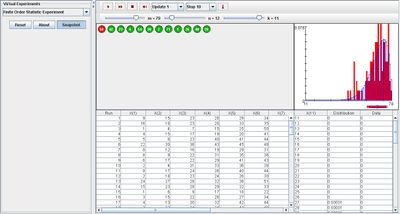 Note that parameter m can never be smaller than n since n is a sample from population m.

The Finite Order Experiment is an applet that generalizes the importance of experiments that consist of randomly selecting a sample from a population without replacement.

Suppose car engineers are presented with a problem. One of the four cylinders in their enhanced vehicle continues to fail after driving over 1,000 miles. They run a test to determine which of the four cylinders is causing the problems in a sample size on 50. Using this applet may be a simple way to present their situation.

Another example may be a physician wants to determine whether his young patients are seriously ill or faking their illness to ditch school. His sample size is the number of young patients that visit him on week days. For those with mild symptoms, he prescribed Advil or a placebo. This applet may help demonstrate the outcomes of his experiment.