The experiment is to run a Poisson process until time t. The arrivals are shown as red dots on a timeline, and the number of arrivals N is recorded on each update. The density and moments of N are shown in the distribution graph and the distribution table. The parameters of the experiment are the rate of the process r and the time t, which can be varied with the scroll bars above.

To provide a simulation demonstrating the effects when varying the time and the rate of the process of interest, and to give a better generalization of the Poisson distribution analytically and graphically.

Go to the SOCR Experiment and select the Poisson Experiment from the drop-down list of experiments on the top left. The image below shows the initial view of this experiment: 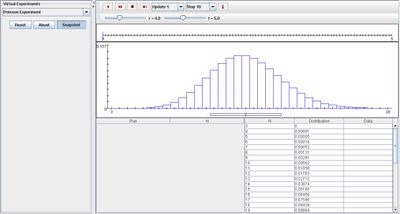 Because parameter t and r may be varied, both variables are able to modify the shape of the distribution graph. When either r or t increase, the distribution graph takes a more accurate shape of the normal curve, whereas decreasing the values of these two variables will cause the graph to be less normal. The images shown below demonstrate these effect as the first illustrates what happens when t is increased and the second illustrates what happens when both t and r are increased: 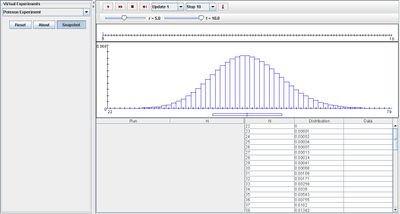 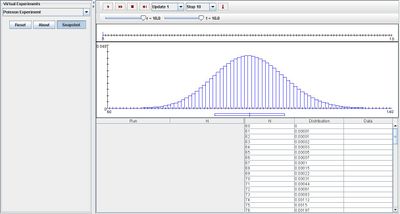 Note that the empirical density and moments graph begin to converge to the distribution graph after every trial. As shown: 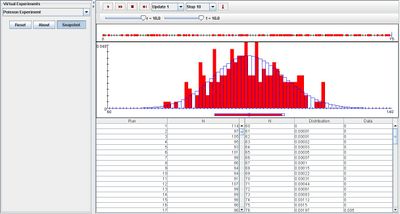 The Poisson Experiment is an applet that generalizes the importance of experiments involving Poisson distributions. It may be used in many different types of examples:

Suppose there is a tank in which water leaks out at a rate of five gallons per minute. At the same time, a solution with 5% pollution enters the tank. Engineers want to be able to illustrate this event by using the Java applet for Poisson distribution.