Go to the SOCR Experiment [[1]] and select the Proportion Test Experiment from the drop-down list of experiments on the top left. The image below shows the initial view of this experiment: 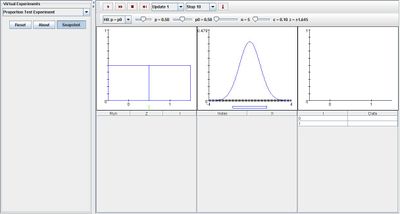 Initially, the experiment sets p = p0 as the null hypothesis in the list box. When varying parameter p, increasing p will raise the proportion of value 1 in the distribution graph of the first image and decreasing p will lower the proportion of value 0. The changes in the first image will occur for all selections of the null hypothesis in the list box. Similarly, when modifying p0, the green indicator in the first graph will shift accordingly.

The image shown below demonstrates these properties when selecting p is greater than or equal to p0 with a large alpha value:

As trials are executed, the empirical density graph converges toward the distribution graphs of the first and third graphs. Also note that parameter alpha affects the outcome of the third graph. With a large value of alpha, the proportion of value 1 in the third graph obtains a higher value. The image below demonstrates this: 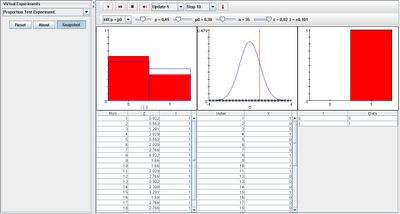 The Proportion Test Experiment is a simple simulation that demonstrates the outcomes of Bernoulli trials with successes and failures. It may be used in many different types of situations such as:

Suppose stock brokers want to test the proportions of successes and failures of a specific identified company.

Suppose researchers want to illustrate their findings of successes and failures of an enhanced pain killer.