In the red and black experiment, a player starts with an initial fortune x and bets (at even stakes) on independent trials for which the probability of winning is p. Play continues until the player is either ruined or reaches a fixed target fortune a. Either of two player strategies can be selected from a list box. With timid play, the player bets 1 on each trial. With bold play, the player bets her entire fortune or what is needed to reach the target (whichever is smaller).

Variable J indicates the events that the player wins (reaches her target) and variable N is the number of trials played. These variables are recorded on each update. The first graph shows the initial and target fortunes and the final outcome. The density of J is shown in the middle graph and table, and the mean of N is shown in the last graph and table. The parameters x and p can be varied with scroll bars, and the target fortune a can be chosen from a list box.

The Red and Black Experiment is a basic gambling model in which it demonstrates the probabilities of outcomes if the trials are unfair. By using this applet, users will be able to grasp a better understanding of how some casino games work like roulette, or a generalization involving biased probabilities.

Go to the SOCR Experiment and select the Red and Black Experiment from the drop-down list of experiments on the top left. The image below shows the initial view of this experiment: 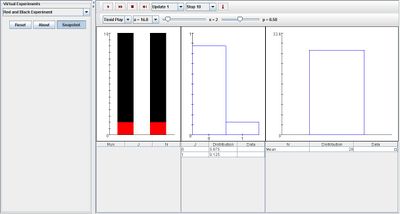 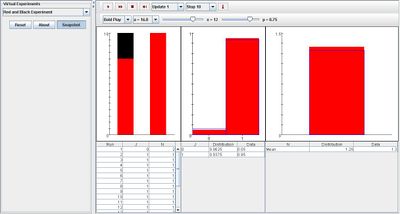 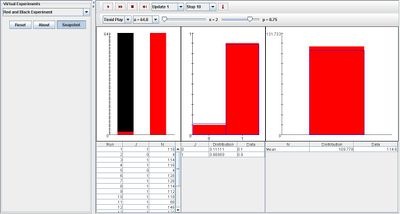 The Red and Black Experiment is best applicable in gambling situations such as:

A gambler would like to maximize the probability of reaching the target of fortune. By using this applet, he is able to test on Timid or Bold play. Afterwards he will be able to draw personal conclusions as to which approach will better his chances of winning.