The main focus of the Triangle Experiment is to provide a simulation that demonstrates graphically and analytically of random points forming triangles. After using this applet, users should be able to understand the properties and characteristics of calculus based probability. 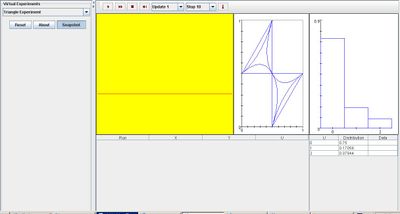 As the number of trials increase, the empirical density graph converges to the distribution graph on the right. The scatter plot keeps record of every run and the triangle on the left must be changed after every run to illustrate the type of shape formed. The image below demonstrates this: 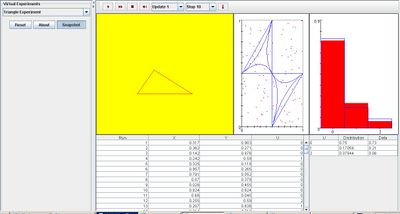 The Triangle Experiment is a simple application that can be used in calculus based probability events. It may also be used in real life situations such as:

Suppose entry-level architectures want to determine the probability of randomly selecting points to form an equilateral triangle. After using this applet, they are able to analytically and geometrically demonstrate that the probability for the event of interest to occur is very small.

Suppose constructors are given an area in which they can plot 12 points total and form the basis of a building that are shaped as triangles. By using this applet, they are able to explore the many different types and shapes of triangles that can be formed under these conditions.