This activity is intended for middle school students and demonstrates a study of geographic and time effects of Ozone pollution on human health. The general version of this activity can be found here and is more appropriate for high school and college students.

The aims of this activity are to:

There are several videos that demonstrate the mechanics of using the SOCR Motion Charts to analyze longitudinal multivariate data: 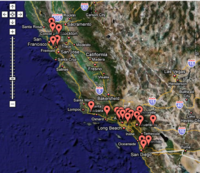 The goals of the study is to identify relationships and associations between the variables and map geographically ozone pollution across the years.

The table below shows the geographic distribution (by county) and the economic costs (total of $521 million/year) attributed only to school absences, restricted activity days, respiratory hospitalization, and asthma Emergency room visits due to smog pollution.

You can use the SOCR Pie chart to graph this distribution of economic costs associated with ozone pollution, as shown on the image. How much, in real dollar terms, is the direct economic impact on Los Angeles county? 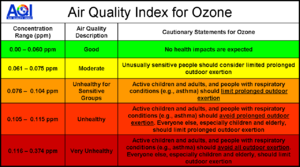 The following chart illustrates the health-related interpretation of the Ozone data in terms of the particulate (particles per million, ppm) recordings, according to the National Oceanic and Atmospheric Administration's (NOAA) Air Quality Index (AQI).

You should see an image like this one shown below. In this mapping, each bubble corresponds spatially to a geographic location, just like in the geographic-map above. Play this motion charts by clicking the Play button and observe the increase of hot-colored bubbles in later years at geographic locations which did not show unhealthy ozone pollution levels in the early years.

You can now try to explore, manipulate and analyze the ozone pollution data yourself. Open 3 tabs in your browser

The image below shows this setting. 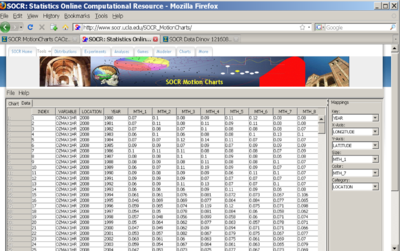 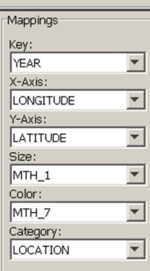 The table below contains a summary of the annual pollution rates (ppm) for each of the 20 locations across the span of 27 years. 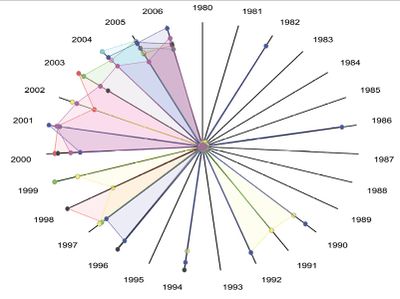