The figure below describes the fact that bias should not be the only criterion for estimator efficacy. So, which is more important and how should we choose between an average shot fall somewhere near the target with broad scatter, or trading a small offset for being close most of the time? In order to better understand bias and precision and the trade-off between these two as well as their significance in choosing a better model or test, we are going to present a general introduction to bias and precision and varieties of ways to measure these two important criteria. We are also going to discuss the relationship between these two and how we are going to choose a model based on performance in these two areas. 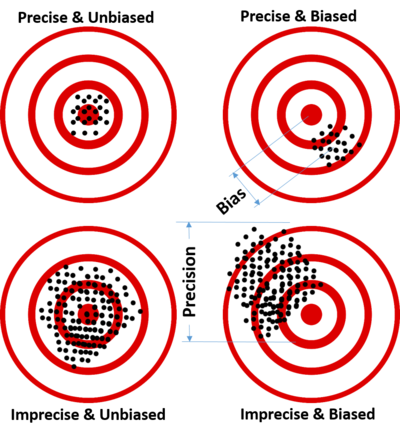 Which is more important, a unbiased result or result with higher precision? There is no easy answer. Consider the example of MLE, which is often biased, meaning that the long-run expected value of the estimator differs from the true value with some small bias. Often the bias can be corrected, for example, in the familiar denominator of the unbiased estimator for the standard deviation of a normal density with n-1 as a replacement of n in the denominator. Unbiased is often misunderstood as superior. However, this is not always true. In fact, this statement is only true when an unbiased estimator has superior precision too. But biased estimators often have smaller overall error than unbiased ones. So clearly, both criteria must be considered for an estimator to be judged superior to another.

Bias is a systematic error that contributes to the difference between the mean of a large number of test results and an accepted reference value. It is the average difference between the estimator and the true value. It describes the bias and the methods utilized to provide corrected test results. If the bias is unknown but the direction or bounds of the bias can be estimated, this information should be included in the bias statement.

where $E_\theta$ is the expected value of the (unknown) population parameter $\theta$ over the distribution $P_\theta(x) = P_\theta(x\mid\theta)$. If we were able to observe all possible outcomes $x$ and average the corresponding $\hat\theta$ estimates we would get $\theta$, otherwise the estimate is biased.

Precision is the closeness of agreement among test results obtained under prescribed conditions. It is the standard deviation of the estimator. It allows potential users of the test method to assess, in general terms, its usefulness in proposed application. It is not intended to contain values that can be duplicated in every user’s laboratory. The statement offers guidelines regarding the type of variability that can be expected among test results when the method is used in one or more reasonable competent laboratories.

To choose between tests or models based on bias and precision is really a trade-off between these two and the choice should be made based on the objective of the model. An unbiased and precise estimator would of course be the best choice. To choose between an unbiased and imprecise estimator and a biased and precise estimator, we need to be more careful. If it aims to find an estimator, which is on average more close to the true value, then unbiased estimator would weight more than precision. If precision and small variations are our top priority, then the later would be better than the former. However, this is on the basis that the difference is comparable between these two measurements.

In the second table, the empirical bias and mean square error of each estimator are recorded as the experiment continues to run. Statistics U and V are point estimators, which are functions of the sample data that are used to estimate the unknown population parameter. It is referred to as an estimate of the actual application of the set of data. The parameter a and n can be varied with scroll bars.

This experiment demonstrates an easy to understand, demonstrate and utilize protocol for a stochastic estimation of $ e $ . The algorithm may be significantly improved in terms of both speed of convergence and accuracy, relative to sample size $ (n) $.However, the emphasis in this experiment is simplicity and simulation of a transcendental number in real-time using basic tools (sampling from uniform distribution).

Selection bias can occur in a case-control study when controls are _______ to be included in the study if they have been exposed.

Which of the following are ways to minimize selection bias in the design of a study?

The true odds ratio of a study was calculated from the table below to be 2.33.

According to the table below, what direction is the bias in the observed results below? (Hint: Calculate OR)

Individuals who are exposed are more likely to be lost to follow-up and have their outcome be unobserved. This is an example of selection bias.

Prove that sample variance is an unbiased estimator of the population variance.