Three main features of sample data are commonly reported as critical in understanding and interpreting the population or process that the data represent. These include Center, Spread and Shape. The main measures of centrality are Mean, Median and Mode(s). Common measures of variability include the range, the variance, the standard deviation, and mean absolute deviation. The shape of a (sample or population) distribution is an important characterization of the process and its intrinsic properties.

Suppose you want to synthesize the information contained in a large dataset (e.g., SOCR Data) and communicate this summary quickly and effectively to someone else. One approach is to estimate the point of centrality, the amount of dispersion and the shape of the histogram of the data and use these as concise intrinsic characteristics of the process generating the observed data.

The main measures of centrality are mean, median and mode.

Suppose we are interested in the survival times for some terminally ill patients undergoing an experimental intervention. If we conduct an ethical IRB-approved study including nine male patients and observe their survival times, as shown below. How can we determine the expected mean (center) survival time?

The sample-median can be thought of as the point that divides a distribution in half (50/50). The following steps are used to find the sample-median:

The modes represent the most frequently occurring values (i.e., the numbers that appear the most). The term mode is applied both to probability distributions and to collections of experimental data.

A statistic is said to be resistant if the value of the statistic is relatively unchanged by changes in a small portion of the data. Referencing the formulas for the median, mean and mode, which statistic seems to be more resistant?

If you remove the student with the long jump distance of 106 and recalculate the median and mean, which one is altered less (and is therefore more resistant)? Notice that the mean is very sensitive to outliers and atypical observations, making it less resistant than the median.

The following two sample measures of population centrality estimate resemble the calculations of the mean; however, they are much more resistant to change in the presence of outliers.

The arithmetic mean answers the question: If all observations were equal, what would that value (center) have to be in order to achieve the same total? \[n\times \bar{x}=\sum_{i=1}^n{x_i}\]

In some situations, there is a need to think of the average in different terms, not in terms of arithmetic average.

If we study speeds (velocities), the arithmetic mean is inappropriate. However, the harmonic mean (which is computed differently) gives the most intuitive answer to what the "middle" is for a process. The harmonic mean answers the question: If all the observations were equal, what would that value have to be in order to achieve the same sample sum of reciprocals?

In contrast, the geometric mean answers the question: If all the observations were equal, what would that value have to be in order to achieve the same sample product?

There are many measures of (population or sample) variation, including the range, the variance, the standard deviation, mean absolute deviation, etc. These are used to assess the dispersion or spread of the population.

The range is the easiest measure of dispersion to calculate, but is probably not the best measure. The Range = max - min. For example, for the survival time data, the range is calculated by:

Note that the range is only sensitive to the extreme values of a sample and ignores all other information. Therefore, two completely different distributions may have the same range.

Obviously, the $CV$ is well-defined for processes with well-defined first two moments (mean and variance), but also requires a non-trivial mean (\(\mu \not= 0\)). If the $CV$ is expressed as a percentage, this ratio is multiplied by 100. The sample coefficient of variation is computed mostly for data measured on a ratio scale. For instance, if a set of distances are measured, the standard deviation does not depend on whether the distances were measured in kilometers (metric) or miles. This is because changes in the particle/object's distances by 1 kilometer also changes its distance by 1 mile. However the mean distance of the data would differ in each measurement scale (as 1 mile is approximately 1.7 kilometers) and thus the coefficient of variation would differ. In general, the $CV$ may not have any meaning for data on an interval scale.

The five-number summary for a dataset is the 5-tuple \(\{min, Q_1, Q_2, Q_3, max\}\), which contains the sample minimum, first-quartile, second-quartile (median), third-quartile, and maximum.

To solve this problem, we employ different versions of the mean absolute deviation:

For the survival time data, the standard deviation is: 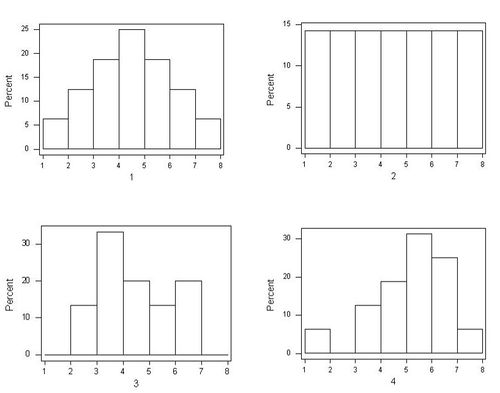 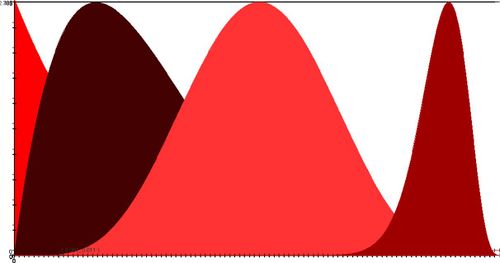 Other Measures of Shape