Meta-analysis is an approach to combine treatment effects across trials or studies into an aggregated treatment effect with higher statistical power than observed in each individual trials. It may detect HTE by testing for differences in treatment effects across similar RCTs. It requires that the individual treatment effects are similar to ensure pooling is meaningful. In the presence of large clinical or methodological differences between the trials, it may be to avoid meta-analyses. The presence of HTE across studies in a meta-analysis may be due to differences in the design or execution of the individual trials (e.g., randomization methods, patient selection criteria). Cochran's Q is a methods for detection of heterogeneity, which is computed as the weighted sum of squared differences between each study's treatment effect and the pooled effects across the studies. It is a barometer of inter-trial differences impacting the observed study result. A possible source of error in a meta-analysis is publication bias. Trial size may introduce publication bias since larger trials are more likely to be published. Language and accessibility represent other potential confounding factors. When the heterogeneity is not due to poor study design, it may be useful to optimize the treatment benefits for different cohorts of participants.

Cochran's Q statistics is the weighted sum of squares on a standardized scale8. The corresponding P value indicates the strength of the evidence of presence of heterogeneity. This test may have low power to detect heterogeneity sometimes and it is suggested to use a value of 0.10 as a cut-off for significance (Higgins et al., 2003). The Q statistics also may have too much power as a test of heterogeneity when the number of studies is large. 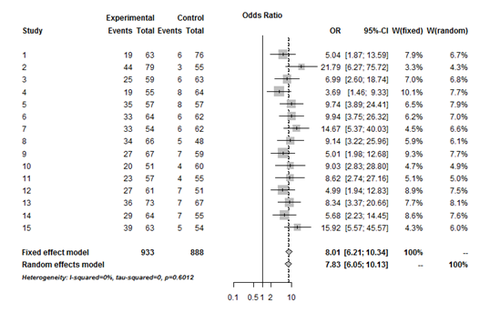 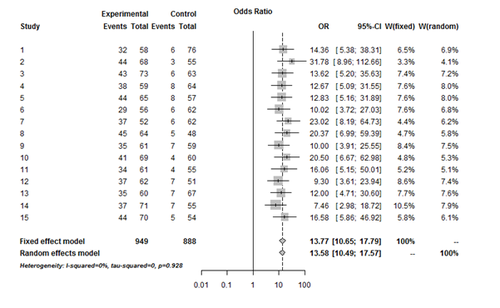 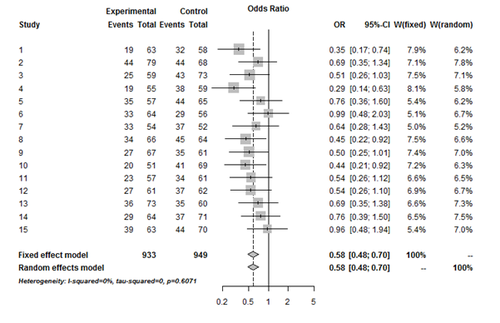 The forest plot shows the I2 test indicates the evidence to reject the null hypothesis (no study heterogeneity and the fixed effects model should be used).

This technique combines (a “series of”) n-of-1 trial data to identify HTE. An n-of-1 trial is a repeated crossover trial for a single patient, which randomly assigns the patient to one treatment vs. another for a given time period, after which the patient is re-randomized to treatment for the next time period, usually repeated for 4-6 time periods. Such trials are most feasibly done in chronic conditions, where little or no washout period is needed between treatments and treatment effects are identifiable in the short-term, such as pain or reliable surrogate markers. Combining data from identical n-of-1 trials across a set of patients enables the statistical analysis controlling for patient fixed or random effects, covariates, centers, or sequence effects, see Figure below. These combined trials are often analyzed within a Bayesian context using shrinkage estimators that combine individual and group mean treatment effects to create a “posterior” individual mean treatment effect estimate which is a form of inverse variance-weighted average of the individual and group effects. Such trials are typically more expensive than standard RCTs on a per-patient basis, however, they require much smaller sample sizes, often less than 100 patients (due to the efficient individual-as-own-control design), and create individual treatment effect estimates that are not possible in a non-crossover design9. For the individual patient, the treatment effect can be re-estimated after each time period, and the trial stopped at any point when the more effective treatment is identified with reasonable statistical certainty.

A study involving 8 participants collected data across 30 days, in which 15 treatment days and 15 control days are randomly assigned within each participant10. The treatment effect is represented as a binary variable (control day=0; treatment day=1). The outcome variable represents the response to the intervention within each of the 8 participants. Study employed a fixed-effects modeling. By creating N − 1 dummy-coded variables representing the N=8 participants, where the last (i=8) participant serves as the reference (i.e., as the model intercept). So, each dummy-coded variable represents the difference between each participant (i) and the 8th participant. Thus, all other patients' values will be relative to the values of the 8th (reference) subject. The overall differences across participants in fixed effects can be evaluated with multiple degree-of-freedom F-tests. 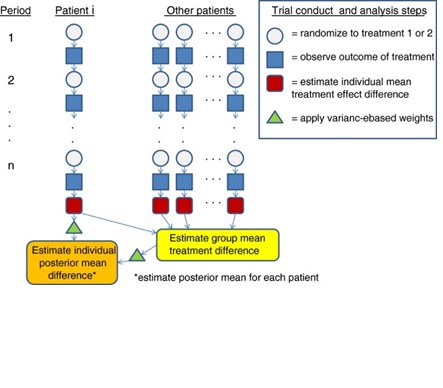 Complete data is available in the Appendix.

QTE employs quantile regression estimation (QRE) to examine the central tendency and statistical dispersion of the treatment effect in a population. These may not be revealed by the conventional mean estimation in RCTs. For instance, patients with different comorbidity scores may respond differently to a treatment. Quantile regression has the ability to reveal HTE according to the ranking of patients’ comorbidity scores or some other relevant covariate by which patients may be ranked. Therefore, in an attempt to inform patient-centered care, quantile regression provides more information on the distribution of the treatment effect than typical conditional mean treatment effect estimation. QTE characterizes the heterogeneous treatment effect on individuals and groups across various positions in the distributions of different outcomes of interest. This unique feature has given quantile regression analysis substantial attention and has been employed across a wide range of applications, particularly when evaluating the economic effects of welfare reform.

One caveat of applying QRE in clinical trials for examining HTE is that the QTE doesn’t demonstrate the treatment effect for a given patient. Instead, it focuses on the treatment effect among subjects within the qth quantile, such as those who are exactly at the top 10th percent in terms of blood pressure or a depression score for some covariate of interest, for example, comorbidity score. It is not uncommon for the qth quantiles to be two different sets of patients before and after the treatment. For this reason, we have to assume that these two groups of patients are homogeneous if they were in the same quantiles.

Income-Food Expenditure Example: Let’s examine the Engel data (N=235) on the relationship between food expenditure (foodexp) and household income (income)11. We can plot the data and then explore the superposition of the six fitted quantile regression lines.

Note: If Y be a real valued random variable with cumulative distribution function FY(y)=P(Y≤ y), then the τ-quantile of Y is given by 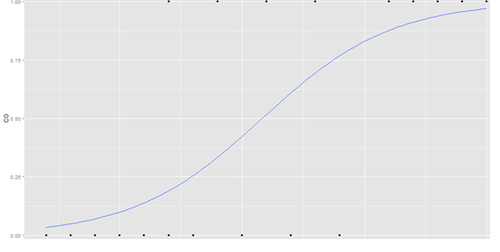 Nonparametric regression enables dealing with HTE in RCTs. Different nonparametric methods, such as kernel smoothing methods and series methods, can be used to generate test statistics for examining the presence of HTE. A kernel method is a weighting scheme based on a kernel function (e.g. uniform, Gaussian). When evaluating the treatment effect of a patient in RCTs, the kernel method assigns larger weights to those observations with similar covariates. This is done because it is assumed that patients with similar covariates provide more relevant data on predicted treatment response. Examining participants that have different backgrounds (e.g., demographic, clinical), kernel smoothing methods utilize information from highly divergent participants when estimating a particular subject’s treatment effect. Lower weights are assigned to very different subjects and the kernel methods require choosing a set of smoothing parameters to group patients according to their relative degree of similarities. A drawback is that the corresponding proposed test statistics may be sensitive to the chosen bandwidths, which inhibits the interpretation of the results. Series methods use approximating functions (splines or power series of the explanatory variables) to construct test statistics. Compared to kernel smoothing methods, series methods normally have the advantage of computational convenience; however, the precision of test statistics depends on the number of terms selected in the series.

Let’s use the Canadian cross-section wage data (cps71) consisting of a random sample taken from the 1971 Canadian Census for male individuals having common education (High-School). N=205 observations, 2 variables, the logarithm of the individual’s wage (logwage) and their age (age). The classical wage equation model includes a quadratic term of age.

Predictive risk models represent a class of methods for identifying potential for HTE when the individual patient risk for disease-related events at baseline depends on observed factors. For instance, common measures are disease staging criteria, such as those used in COPD or heart failure, Framingham risk scores for cardiovascular event risk, or genetic variations, e.g., HER2 for breast cancer. Initial predictive risk modeling, aka risk function estimation, is often performed without accounting for treatment effects. Least squares or Cox proportional hazards regression methods are appropriate in many cases and provide relatively more interpretable risk functions, but rely on linearity assumptions and may not provide optimal predictive metrics. Partial least squares is an extension of least squares methods that can reduce the dimensionality of the predictor space by interposing latent variables, predicted by linear combinations of observable characteristics, as the intermediate predictors of one or more outcomes. Recursive partitioning, such as random forests, support vector machines, and neural networks represent latter methods with better predictive power than linear methods. Risk function estimation can range from highly exploratory analyses to near meta-analytic model validation, and may be useful at any stage of product development.