In Geometrical, let three variables $X, Y and\, Z$ where $x$ is the independent variable $(IV)$, $y$ is the dependent variable $(DV)$, and $Z$ is the ‘control’ or ‘extra variable’ be chosen from a joint probability distribution over $n$ variables $V$. Further let $v_{j}$, $I \leq I \leq N,$ be $N$ n-dimensional i.i.d. samples taken from the joint probability distribution over $V$. We then consider the N-dimensional vectors $x$, and $z$. The residuals $R_{X}$ comes from the linear regression of $X$ using $Z$, which can be considered as an N-dimensional vector $r_{X}$, has a zero scalar product with the vector $z$ generated by $Z$. This indicates that the residuals vector lives on a hyperplane $S_{Z}$ that is perpendicular to $Z$.

Similar to partial correlation, both of which measure variance after certain factors are controlled for, but the former holds the third variable constant for either X or Y, while the latter holds the third variable constant for both. The semi-partial (or part) correlation can be regarded as more practically relevant since it is scaled to (i.e., relative to) the total variability in the dependent (response) variable. Meanwhile, it is less theoretically useful because it is less precise about the unique contribution of the independent variable. Semi-partial correlation of X with Y is always less than or equal to the partial correlation of X with Y.

This article proposed to use a partial correlation analysis to construct approximate Undirected Dependency Graphs from large-scale biochemical data. This method enables a distinction between direct and indirect interactions of biochemical compounds, thereby inferring the underlying network topology. The method is first thoroughly evaluated with a large set of simulated data. Results indicate that the approach has good statistical power and a low False Discovery Rate even in the presence of noise in the data. We then applied the method to an existing data set of yeast gene expression. Several small gene networks were inferred and found to contain genes known to be collectively involved in particular biochemical processes. In some of these networks there are also uncharacterized ORFs present, which lead to hypotheses about their functions.

This article compared empirical type I error and power of different permutation techniques that can be used for partial correlation analysis involving three data vectors and for partial Mantel tests. The partial Mantel test is a form of first-order partial correlation analysis involving three distance matrices, which is widely used in such fields as population genetics, ecology, anthropology, psychometry and sociology. The methods compared are the following: 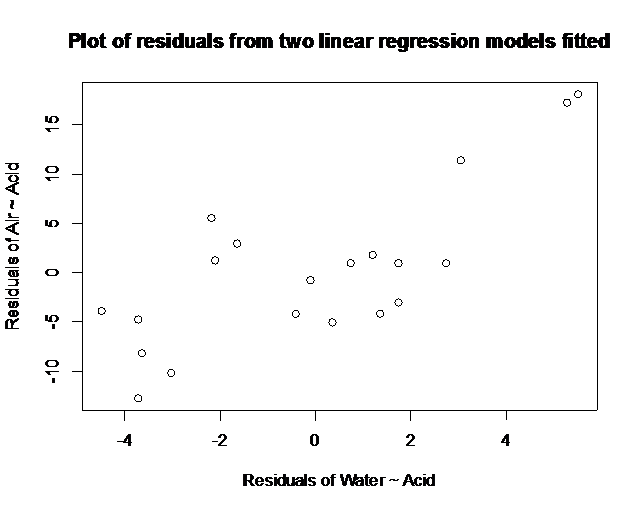 Hence, we have significant evidence to reject the null hypothesis and conclude that Air Flow and Water Temperature are significantly correlated when controlling for acid concentration at 5% level of significance.

Same question and we use the package of ppcor in R this time: