Rate of change is a simple technical analysis indicator describing the rate in which one quantity changes in relation to another quantity:

Suppose we are studying on the changes in stock prices over a certain period and we know that the closing price on June 1, June 15, December 1, December 15 are 36, 38, 62, and 64 respectively. It is easily calculated that the absolute change in closing price of this stock from June 1 to June 15 is 38-36=2 which is the same as the absolute change in closing price of the stock from December 1 to December 15, which is also 64-62=2. However, is it enough to conclude that the price change is absolutely the same between these two time periods. For example, is it enough to reflect the same level of optimization for this stock in the market. The answer would be NO. Rate of change in the first half of June =(38-36)/36=0.0556, indicating that the stock price increased by 5.56% in the first half of June which is bigger compared to the rate of change in December (64-62)/62=0.0323. In order to make comparisons more comprehensively, we need to explore the properties of rate of change.

which is the slope of the line located by the two data points. Zero rate of change will be illustrated with a horizontal line.

Rate of change in a quadratic function

The rate of change at the point, which is located on the curve is indicated by the red line in the chart. The essence of this is that even the pattern of a point does not follow a linear pattern, the rate of change is can still be calculated at that specific time point where the change in x is almost zero, so the rate of change would be the instant change in y at that point. 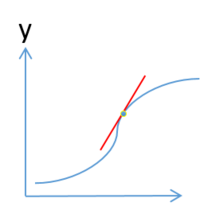