Many scientific applications involve the analysis of relationships between two or more variables involved in studying a process of interest. In this section, we will study the correlations between 2 variables and start with simple linear regressions. Consider the simplest of all situations in which bivariate data (i.e., X and Y) are measured for a process, and we are interested in determining the association between the two variables with an appropriate model for the given observations. The first part of this lecture will discuss correlations; we will then elaborate on the use of SLR to assess correlations.

The analysis of relationships between two or more variables involved in a process of interest is widely applicable. We begin with the simplest of all situations, in which bivariate data (i.e., X and Y) are measured for a process, and we are interested in determining the relationship between these two variable using an appropriate model for the observations (e.g., fitting a straight line to the pairs of (X,Y) data). For example, we measured students' math scores on a final exam, and we want to find out whether there is any association between the final score and their participation rate in the math class. Another potential relationship of interest might be whether there is an association between weight and lung capacity. Simple linear regression is a useful method for addressing these questions, and it is particularly appropriate for assessing associations in simple casess.

Consider a research conducted on see if body fat is associated with age. The data included 18 subjects with the percentage of body fat and the age of the subjects.

The hypothesis tested: $H_{0}:\beta=0$ vs.$H_{a}:\beta\ne0;$ a t-test would be the test we are going to use here given that the data drawn is a random sample from the population. 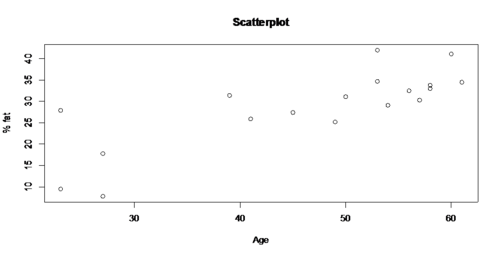 Then we fit a simple linear regression of y on x and draw the scatterplot along with the fitted line: 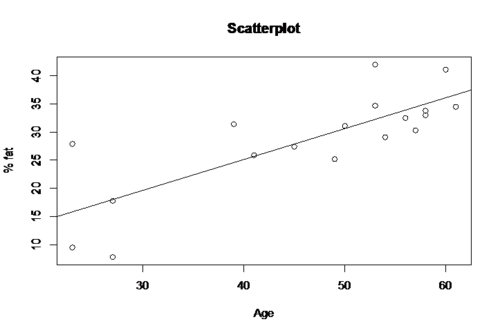 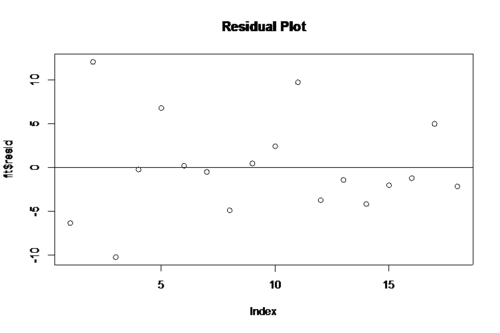 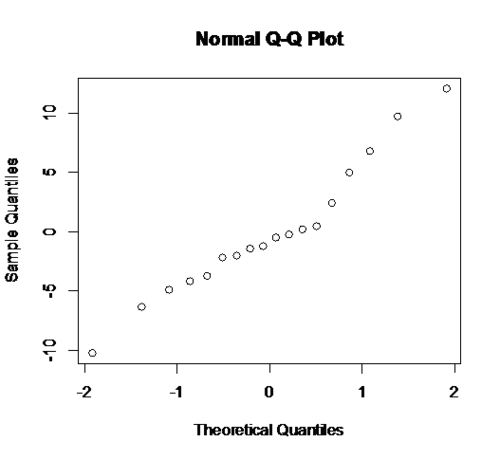 From the residual plot and the QQ plot of residuals we can see that meet the constant variance and normality requirement with no heavy tails and the regression model is reasonable. From the summary of the regression model we have the t-test on the slope has the t value is 5.191 and the p-value is 8.93 e-05. We can reject the null hypothesis of no linear relationship and conclude that is significant linear relationship between age and percentage of body fat at 5% level of significance.

The confidence interval for the parameter tested is $b±t^{*} SE_{b}$, where b is the slope of the least square regression line, $t^{*}$ is the upper $\frac {1-C} {2}$ critical value from the t distribution with degrees of freedom n-2 and $SE_{b}$ is the standard error of the slope.

Suppose we study a random sample (size 16) of baseball teams and the data show the team’s batting average and the total number of runs scored for the season.

The correlation between x and y is 0.8655 which is pretty strong positive correlation. So it would be reasonable to make the assumption of a linear regression model of number of runs scored and the average batting. 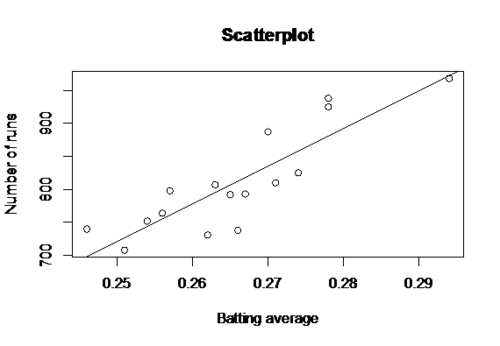 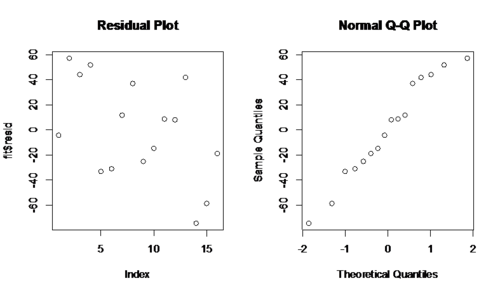 You can also use SOCR SLR Analysis Simple Regression to copy-paste the data in the applet, estimate regression slope and intercept and compute the corresponding statistics and p-values.

The brain volumes (responses) and age (predictors) for 2 cohorts of subjects (Group 1 and Group 2).

Modeling of the linear relations between two variables using regression analysis. $Y$ is an observed variable and $X$ is specified by the researcher, e.g. $Y$ is hair growth after $X$ months, for individuals at certain does level of hair growth cream; $X$ and $Y$ are both observed variables. 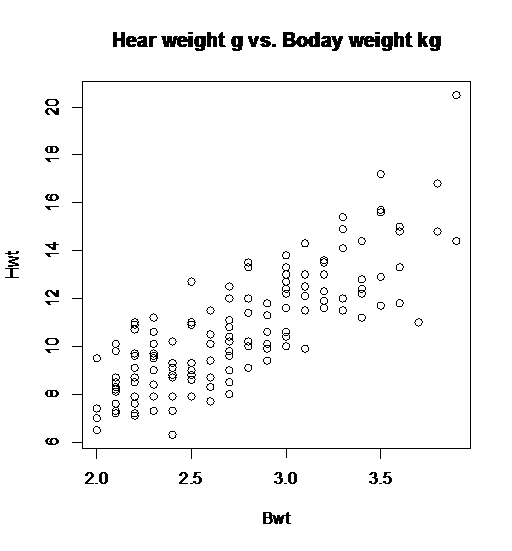 A positive correlation between two variables X and Y means that if X increases, this will cause the value of Y to increase.

The correlation between working out and body fat was found to be exactly -1.0. Which of the following would not be true about the corresponding scatterplot?

Suppose that the correlation between working out and body fat was found to be exactly -1.0. Which of the following would NOT be true, about the corresponding scatterplot?

If the correlation coefficient is 0.80, then:

In the early 1900's when Francis Galton and Karl Pearson measured 1078 pairs of fathers and their grown-up sons, they calculated that the mean height for fathers was 68 inches with deviation of 3 inches. For their sons, the mean height was 69 inches with deviation of 3 inches. (The actual deviations a bit smaller, but we will work with these values to keep the calculations simple.) The correlation coefficient was 0.50. Use the information to calculate the slope of the linear model that predicts the height of the son from the height of the fathers.

Suppose that wildlife researchers monitor the local alligator population by taking aerial photographs on a regular schedule. They determine that the best fitting linear model to predict weight in pounds from the length of the gators inches is: Weight = -393 + 5.9*Length,with r2 = 0.836. Which of the following statements is true?

Which of the following is NOT a property of the LSR Line?

Suppose that the linear model that predicts fat content in grams from the protein of selected items from Burger Queen menu is: Fat = 6.83 + 0.97*Protein. We learn that there are actually 20 grams of fat in the Chucking burger that has 20 grams of protein. Which of the following statements is true?

Which statement describes the principle of "least squares" that we use in determining the best-fit line?

Which of the following is NOT a property of the Least Squares Regression Line?

A simple random sample of 1000 persons is taken to estimate the percentage of Democrats in a large population. It turns out that 543 of the people in the sample are Democrats. Is the following statement true or false? Explain (51%, 57.5%) is approximately a 95% confidence interval for the sample percentage of democrats.

Use the linear model to predict the height of a son whose father's height is 6 feet.

A statistician wants to predict Z from Y. He finds that r-squared is 5%.Which one of the following conclusions is correct?