These data include 79 babies (infants) in a control group (NC) and 79 babies in the intervention (Interv) group. The control group babes were handled using conventional methods. The intervention group babies were held by their mothers prior to, and during the administering of the shot -- “Kangaroo Care”. NIPS scores were recorded immediately after the shot was administered, after 30 seconds, one minute, and two minutes.

Nurses at Northbay Healthcare participate in an Evidence Based Practice (EBP) program. The purpose of EBP is to research and implement improvements in nursing care, and then to gauge the success these changes using statistical methods. In one study, they introduced changes in the way newborn babies are handled. The goal is to reduce pain experienced by the infants resulting from their vitamin K shot. Supervising nurses assessed a newborn's pain using a scale known as a Neonatal Infant Pain Score (NIPS). NIPS scores range from 0 to 7, and are obtained by observing the infant's bodily reactions.

Classroom use of this data set 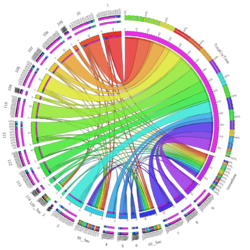 Interactions between Groups and NIPS scores

The body density dataset includes the following 15 variables listed from left to right: