To provide a method for events being randomly chosen without bias and develop a common sense about the behaviors of the variables.

Go to the SOCR Experiments and select the Ball and Urn Experiment from the drop-down list of experiments on the top left. The image below shows the initial view of this experiment: 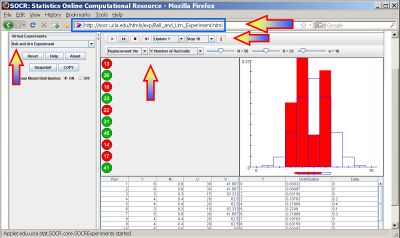 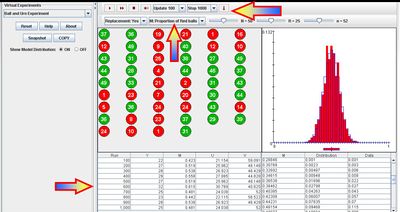 Because the ball and urn experiment is a general example of replacement in statistics, it is best to discuss the differences between experimenting with replacement and without replacement.

The ball and urn experiment is applicable in daily lives.

For instance, at a supermarket, the manager may determine if removing damaged oranges from the produce section will create a better image of the market as customers will randomly select oranges in good condition, or if removing damaged oranges will waste time and effort as customers will continue to randomly select oranges that may either be in good condition or damaged.

The ball and urn java applet may also be applied to situations when one is looking for a penny in the coin bag. Will the probability of randomly selecting a penny be higher when removing coins that are not pennies from the bag, or replacing them back into the bag after every try?

Similarily, a pet owner is trying to fish out a goldfish in his feeding tank of goldfishes and guppies. He is in a rush so he wants to determine if removing the caught guppy would increase his chances of catching the goldfish on the next try. Using this applet may be of some assist to him by demonstrating the effects of runs with or without replacement.