The coin sample experiment is a simple demonstration of the Bernoulli trial. It consists of n coins being tossed with the probability p of heads as an outcome. Random variable Ij gives the outcome for coin j with 1 representing heads and 0 representing tails. Each trial will be recorded and updated in the data table. Parameters n and p can be modified with scroll bars.

To provide a simple method for natural occurring phenomena that have two distinct categorical outcomes (e.g. yes/no, true/false, success/failure, etc.) and develop a general perception about the events.

Go to the SOCR Experiments and select the Coin Sample Experiment from the drop-down list of experiments on the top left. The image below shows the initial view of this experiment: 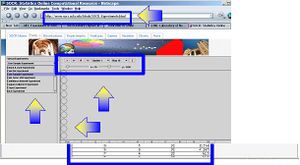 The “update” selection allows the experimenter to modify the trials in which the data after 1, 10, 100, or 1000 trials have been performed. The “stop” selection determines the maximum number of trials to be carried out during the experiment. 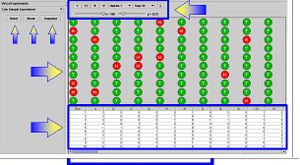 The coin sample experiment is significant for random, categorical variables that may be represented by the Bernoulli distribution [[1]].