The following random variables are recorded on each update: the sum of the scores Y the average score M the minimum score U the maximum score V the number of aces (1's) Z

To provide a simulation demonstrating events of discrete variables and resemblance to the “bell shaped curve” of the Central Limit Theorem. Using this applet should allow the user to gain a better understanding of experimenting with distinct variables.

Go to the SOCR Experiments and select the Dice Experiment from the drop-down list of experiments on the top left. The image below shows the initial view of this experiment: 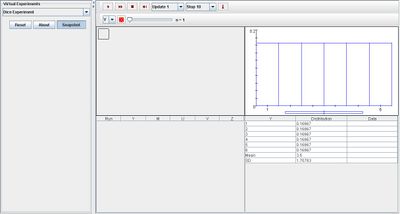 As parameter n increases, the distribution graph will have a “bell shaped curve” for variable Y and M. Similarly, when variable U and V are selected, the distribution graph will become more skewed to the right and left, respectively. For variable Z, it will also be skewed to the right but it also slightly takes form of the “bell shaped curve.” The image below demonstrates this property of the java applet when selecting variable Y after many trials:

Note that the empirical density and moments graph begin to converge to the distribution graph after every trial. 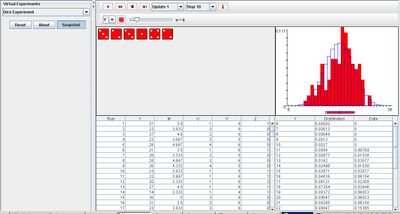 The Dice Experiment is an applet that generalizes the important of experiments involving discrete variables. It allows users to understand the different outcomes when drawing the selected random variables, whether it is the sum of the scores, the average score, etc.

Suppose a gambler wants to test his luck in a casino. He uses this applet to show the actually likelihood of randomly tossing two dice and having their sum equal to 7. With the selection of variable Y, he sees that he has a higher chance of landing with the sum of 7 than most of the other numbers.

For example, researchers want to know which color of the rainbow attracts toddlers the most so that they can develop a product that will be successful. They hypothesize the color yellow to be the best candidate. With this applet, they select variable Z to represent the number of toddlers choosing yellow.