The die scores and the value V are recorded on each update in the first table. The density function of V is shown blue in the graph are recorded in the second table. On each update, the empirical density function of V is shown in red in the red graph and recorded in the second table. In the stop frequency list box, you can set the simulation to stop automatically when V is a particular value.

To provide a simulation demonstrating a different type of conditional probability involving five fair dices and the value of hands, and to give a generalization of more complicated probability events. After applying this applet to other kinds of events, users should be able to develop a better understanding regarding outcomes and characteristics of events.

Go to the SOCR Experiment and select the Poker Dice Experiment from the drop-down list of experiments on the top left. The image below shows the initial view of this experiment: 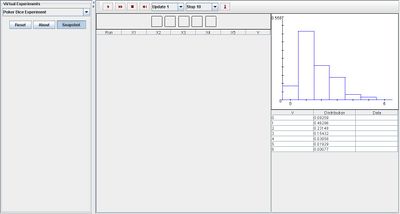 AS the number of trials increase, the empirical density graph converges to the distribution graph:

The Poker Dice Experiment is an example demonstrating the properties of implementing probabilities with or without conditions. For example,

Suppose a dealer wants to be able to demonstrate the properties when dealing cards at the casino he works at so he uses this applet for illustration.