The poker experiment consists of dealing 5 cards at random from a standard deck of 52 cards. V denotes the value of the hand;

The complete details about all interesting poker hands, their counts and corresponding probabilities may be found here.

To provide a simulation demonstrating the differences of probabilities when drawing poker hands and to give a better understanding of how often these hands may occur in a poker game.

Go to the SOCR Experiment and select the Poker Experiment from the drop-down list of experiments on the top left. The image below shows the initial view of this experiment: 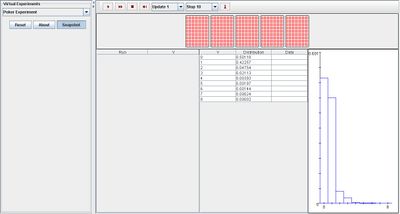 As the number of trials increase, the empirical density graph converges to the distribution graph:

The distribution graph is unimodal with a distinguishable peak and is skewed right because of the probabilities of each card hand. Recall that it is more likely to obtain a pair or two than drawing a straight flush.

The Poker Experiment is a general simulation that demonstrates the probabilities of poker hands analytically and graphically. It may be used in many different types of poker games as well as other events in which there is a much higher probability of event A than event Z.

This activity demonstrates the calculations for the probabilities of the most common Poker events (specific 5-card arrangements).