The applet is part of the SOCR Experiments: Sampling Distribution (CLT) Experiment, which demonstrates the properties of the sampling distributions of various sample statistics. This applet can be used to demonstrate the Central Limit Theorem (CLT) as well as:

The main focus of the Sample Mean Experiment is to provide a simple simulation of four sampling distributions: normal, gamma, binomial, and Poisson. After using this Java applet, one should have a better understanding of the different types of distribution and have the ability to develop a generalization regarding these allocations. 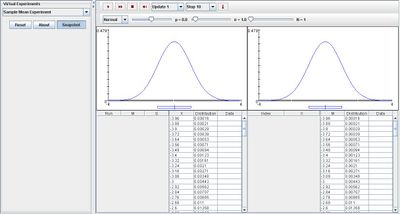 When varying the parameters, both distribution graphs are not effects graphically; they remain normal. The image below demonstrates this after many trials:

Varying parameter k shifts both graphs to the right. Modifying parameter N also affects the distribution graph on the right as it decreases the spread by increasing the smallest value on the x axis. The image below demonstrates these properties by setting parameter k to a small value and parameter N to a large value: 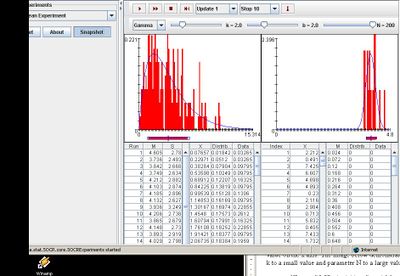 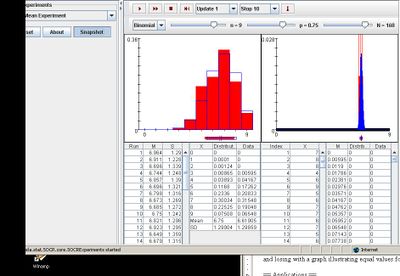 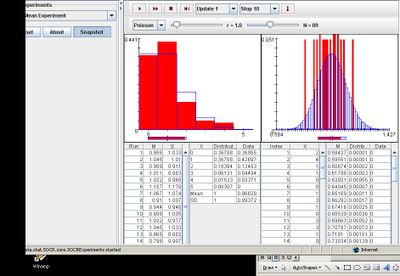 The Sample Mean Experiment is a simple application that can be used in many different types of situations such as:

Suppose researchers want to be able to display their research findings. While selecting 50 adults from a building, they found that the probability of people in their specified age range drinking coffee every morning is approximately normal. Using this applet gives them the ability to do so.

Suppose students want to be able to demonstrate their data information from their science labs. They discovered the probability of rain in a given day and chose specified weeks in the year as their sample mean. By using this applet, they are able to vary the parameters and illustrate their findings.