The experiment is to select a random sample of size n from a distribution, and then to perform a hypothesis test about the median m of the distribution at a specified significance level. The distribution can be selected from a list box; the options are the N(μ,σ2), Γ, and uniform distributions. In each case, the appropriate parameters and the sample size n can be varied with scroll bars. The significance level can be selected with a list box. The null hypothesized value m0 of the median can be selected with a scroll bar; the true quantile level p of m0 is also given. The density of the distribution and m are shown in blue in the first graph; m0 is shown in green. The test statistic N is the number of sample values greater than m0. Under the null hypothesis, N has the binomial distribution with parameters n and 1/2. The density of this distribution and the critical values are shown in the second graph in blue. On each update, the sample density is shown in red in the first graph and the sample values are recorded in the first table. The value of the test statistics N is shown in red in the second graph. The variable J indicates the event that the null hypothesis is rejected. On each update, N and J are recorded in the second table. Note that the null hypothesis is reject (J = 1) if and only if the test statistic N falls outside of the critical values. Finally, the empirical density of I is shown in red in the last graph and recorded in the last table.

The Sign Test Experiment provides a simulation regarding hypothesis testing under different forms of distribution. It facilitates others to learn and understand statistics more, and in result develop a generalization of hypothesis testing. 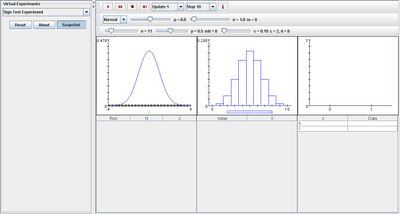 For the distribution graphs, only changes in parameter n affects the shapes of the graphs. When parameter n is increased, the graph on the right carries more values thus it will take on forms that are more curved and more normal. The image below illustrates this: 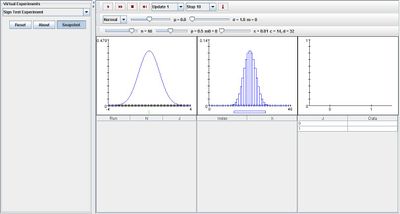 When modifying parameter p, it affects the third image in such a way that when p takes on values at its extremities, the proportion of 1 is very large while 0 has little or no value. With p at its median, the proportion of 0 and 1 are almost equal with the exception that 0 has a higher value than 1. The image below demonstrates this: 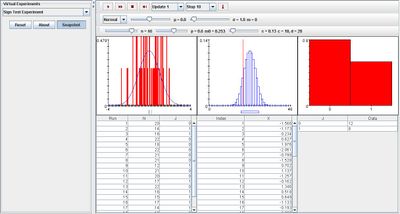 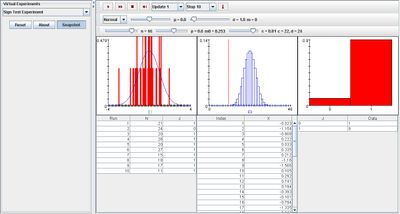 These properties are applicable for all the three distributions with little adjustments or approximations. Overall, they demonstrate the same characteristics of the Sign Test Experiment as well as hypothesis testing.

The Sign Test Experiment is a simulation that may be used in many different types of situations consisting of hypothesis testing and normal, gamma, or uniform distributions such as:

A customer wants to test his hypothesis of consumers selecting the cheapest can of soda in a super market. Using this simulation can help present his findings in a more formal approach.