The purpose of the Variance Estimate Experiment is to provide a simple simulation of approximating confidence intervals for the selected list of distributions. After using this Java applet, one should have a better understanding regarding events dealing with chi square estimate, gamma, and uniform distributions. 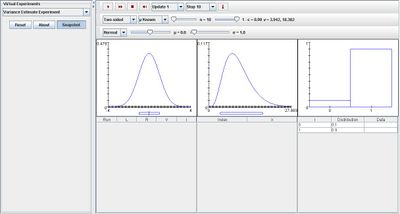 Modifying parameters n and 1-alpha affects the shapes of the distribution graph in the middle and the image on the right. Increasing 1-alpha increases the proportion for 1 in the last image and decreasing it increases the proportion for 0. Increasing parameter n shifts the left end point of the middle graph to the right, resulting in a smaller value of spread. The image below demonstrates these two properties: 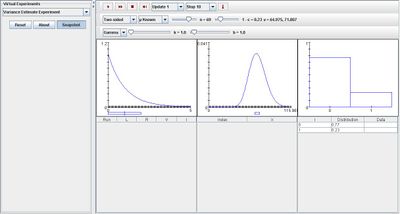 As the number of trials increase, the empirical density graph converges to the distribution graphs for the first and last images displayed. The image below demonstrates this: 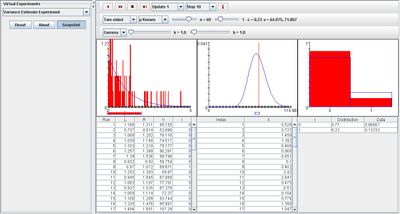 The Variance Estimate Experiment is a simple application that can be used in many different types of situations such as:

Suppose students need to present their experiment of selecting a pack of 24 cans of soda to measure the mean and standard deviation of weight. Once all the information has been gathered and analyzed, using this application can help display their conclusion easily.

Suppose engineers want to display data information regarding the average weight in metal bars in their industry. Because measuring every single bar in the company is impossible, the engineers decide to use this application by selecting “Mean unknown” in one of the list boxes and run the experiment a few times until the resulting images satisfy the requirements.