This SOCR Activity demonstrates the utilization of the SOCR Analyses package for statistical computing. In particular, it shows how to use Hierarchical Clustering and how to interpret the output results.

The results of the above algorithm is usually presented in a dendrogram, which is essentially a tree structure displaying the top-down ordering of clusters under the selected method of distance calculation.

The goals of this activity are to expose learners to:

The following is a list of our supported data formats, applying to both ways of inputting (i.e., file “Load” button and copy-paste from spreadsheet).

We will demonstrate Hierarchical Clustering using a SOCR built-in example. DNA data representing the molecular phylogeny and evolution of primate mitochondrial DNA is obtained from Hayasaka, Gojobori, and Horai (1988). In this homoplasy example, the primate distance matrix was computed by Makarenkov and Legendre, (2004) and is shown below:

The dendrogram to the right of the menu bar summarizes the results of Hierarchical Clustering analysis (using unweighted average method) nicely. To change the method used to calculate the distances between clusters, click on the drop-down menu to the right of “Clustering Algorithm” inside the menu bar, and you will see a list of supported methods: Single linkage, complete linage, unweighted average, weighted average, unweighted centroid, weighted centroid and joint between-within. After selecting, click on the “Update” button on the top left, and the dendrogram will then be updated according to the method selected. The user can simultaneous load a text file of correctly formatted data without affecting the current open dendrogram.

As you notice, the dendrogram is a preferable way of displaying the algorithm of hierarchical clustering, as it gives the user a birds-eye view of the merging process without losing significant information.

Below is the same data where all distance matrix values are converted to integers (multiplying the original values by 1,000). 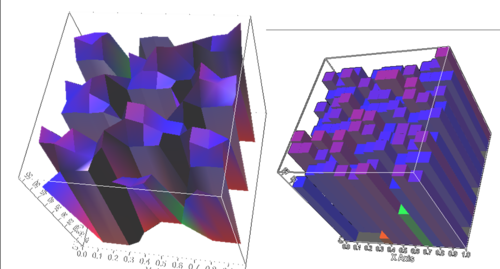 If you happen to click on the Clear button in the middle of the procedure, all the data will be cleared out. Simply start over from step 1 and click on an EXAMPLE button for the data you want.