In the previous section, we discussed statistical inference in comparing k independent samples separated by a single (grouping) factor. Now we will discuss variance decomposition of data into (independent/orthogonal) components when we have two (grouping) factors. Hence, this procedure called Two-Way Analysis of Variance.

Suppose we want to study the dynamics of the US Consumer Price Index (CPI), which is a major economic indicator that measures the average price changes of consumer goods and services.

To motivate 2-way ANOVA we can focus on a 5-year annual summary of the CPI for different types of consumer good (items). The complete dataset can be found here and a small 5-year excerpt is included below. Clearly, we have two-factors that may explain the dynamics of the CPI - year and item-type.

Using the SOCR Charts (see SOCR Box-and-Whisker Plot Activity and Dot Plot Activity), we can generate plots that enable us to compare visually the 4 different CPI items (food, housing, transportation and medical-care) across the 5 years. 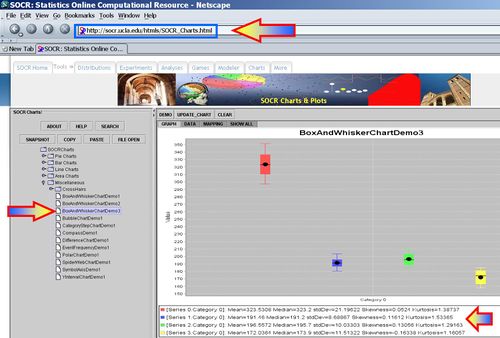 We can also plot the time courses of these 4 CPI items (using the SOCR Line Chart. 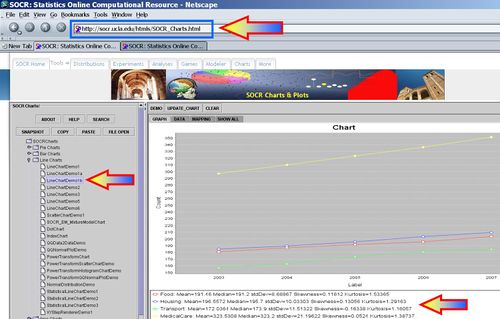 When an \(a \times b\) factorial experiment is conducted with an equal number of observation per treatment combination, and where AB represents the interaction between A and B, the total (corrected) sum of squares is partitioned as:

There are three sets of hypotheses with the two-way ANOVA.

The null hypotheses for each of the sets

The two independent variables in a two-way ANOVA are called factors (denoted by A and B). The idea is that there are two variables, factors, which affect the dependent variable (Y). Each factor will have two or more levels within it, and the degrees of freedom for each factor is one less than the number of levels.

Treatment Groups are formed by making all possible combinations of the two factors. For example, if the first factor has 5 levels and the second factor has 6 levels, then there will be \(5\times6=30\) different treatment groups.

The main effect involves the independent variables one at a time. The interaction is ignored for this part. Just the rows or just the columns are used, not mixed. This is the part which is similar to the one-way analysis of variance. Each of the variances calculated to analyze the main effects is like the between variances

The interaction effect is the effect that one factor has on the other factor. The degree of freedom here is the product of the two degrees of freedom for each factor.

SOCR Analyses provide the tools to compute the 2-way ANOVA. For example, the ANOVA for the Consumer Price Index data above may be easily computed - see the image below. Note that SOCR ANOVA requires the data to be entered in the column format of the first table in this section.

Under the Graphs tab-pane, we can see a variety of plots demonstrating the ANOVA results. 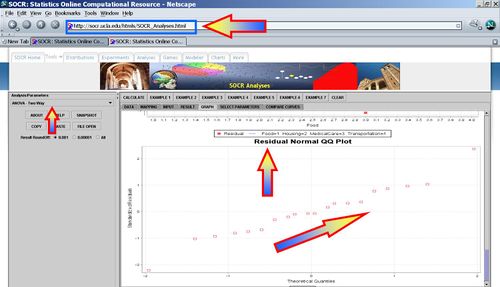 The ANOVA table for these data is reported under the Results tab-pane.

The Two-way ANOVA is valid if:

The following data was collected in a large knee pain study (N=6,046) by TMT Medical and UCLA investigators using an online questionnaire. The goals of the study was to identify the relations between a large number of clinical markers, patient phenotypes and imaging data of knee pain. One specific set of research questions the investigators were interested in related to the effects of mild treatment by applying hot or cold patches to the affected knee areas. The 2 tables below present identical information, however, the second table may be used to paste in the data into the SOCR 2-way ANOVA Applet or any other SOCR analysis tool. Try to answer 2 types of questions: