How to Use RVs?

There are 3 important quantities that we are always interested in when we study random processes. Each of these may be phrased in terms of RVs, which simplifies their calculations.

Obviously, we may define a large number of RV for the same process. When are two RVs equivalent is dependent on the definition of equivalence?

To illustrate one example of using distributions for solving practical problems, we consider the large human weight and height dataset. You can use all 25,000 records or just the first 200 of these measurements to follow the protocol below:

The Web of Distributions

There is a large number of families of distributions and distribution classification schemes.

SOCR Distributome Project and the SOCR Distribution activities illustrate how to use technology to compute probabilities for events arising from many different processes.

The image below shows some of the relations between commonly used distributions. Many of these relations will be explored later. 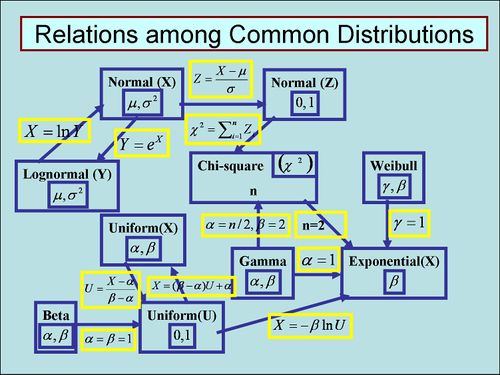 The SOCR Distributome applet provides an interactive graphical interface for exploring the relations between different distributions.