Suppose we have a set of observable correlated random variables, and we want to reduce the dimensionality of the data into a reasonable new set. How can we achieve this dimensionality reduction? Principal component analysis, independent component analysis and factor analysis may be the answers here. How does each of them work? What are the differences among those statistical methods; what are their strengths and weaknesses? How can we decide on the best method for a specific dataset?

First review the rules for matrix and vector multiplication. In an essence, the arithmetic process of multiplying numbers in row $i$ in matrix, or vector, $X^T$ and column $j$ in matrix, or vector, $A$ corresponds to component-wise multiplication followed by adding the terms, summation, to obtain entry $X\times A_{i,j}$ in the product matrix. As an example, $X_{1\times n}^T A_{n\times n}X_{n\times 1} = B_{1\times 1}$ is a scalar value. The transpose notation, $X^T$, indicates that the rows and columns are swapped, e.g., for a standard vector represented as a column, $X=\begin{pmatrix}X_1\\X_2\\...\\X_N \end{pmatrix}$, the transpose is the same vector as a row, $X^T=(X_1, X_2, ..., X_N)$.

Now, suppose we have a sample of $n$ observations as points in a plane: $\{p_1, p_2, …, p_n\}$ in the 2D space, $p=(x_1,x_2)$. How can we account (approximately) for the variation in the sample in as few variables as possible. The figure below illustrates the geometric nature of principal components (PCs). 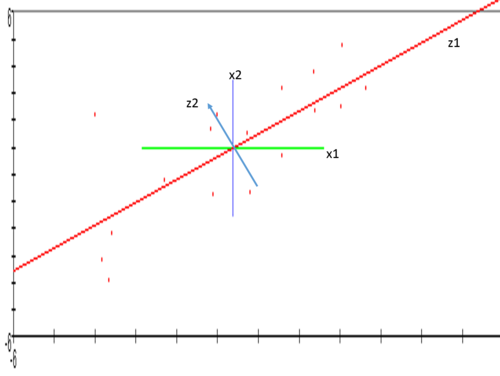 To find the transformation ($a$) we express the $var(Z_1)$ in terms of the variance-covariance matrix of $X$:

Similarly, the second eigenvector $a_2$ maximizes $Var(Z_2)$, subject to:

PCA is a statistical technique that uses an orthogonal transformation to convert a set of observations of possibly correlated variables into a set of variables that are linearly uncorrelated. The resulting uncorrelated variables are called principal components. The first principal component accounts for as much of the variability in the data as possible, and each succeeding component accounts for the remaining variability. PCA is the simplest of the true eigenvector-based multivariate analyses; it reveals the internal structure of the data in a way that best explains the variance in the data. It is a useful statistical technique that has been applied in many fields, including computer networks and image processing, and is a powerful method for finding patterns in high-dimensional datasets.

From the chart above, we can see the distribution of the variance attributed to different variables in the four principal components.

This SOCR activity illustrates the use of PCA.

ICA is a computational method that separates a multivariate signal into additive subcomponents by assuming that the subcomponents are non-Gaussian signals and are statistically independent from each other.

ICA maximizes the statistical independence of the estimated components to find the independent components. In general, ICA cannot identify the actual number of source signals nor can it identify the proper scaling of the source signals. Suppose the data is represented by the random vector $x=(x_1,x_2,…,x_m )^t$, and the components are denoted as $s=(s_1,s_2,…,s_n )^t$. We need to transform the observed data $x$ using a linear transformation $w$, $s=Wx$, into maximally independent components $s$ measured by some functions of independence. There are alternative models for ICA:

Another example of un-mixing two independent signals is shown below:

The derived imaging biomarkers include: