A multinomial experiment is an experiment that has the following properties:

Plugging these values into the multinomial formula we get the probability of the event of interest to be:

This probability is equivalent to the binomial probability (success=green; failure=other color), B(n=5, p=1/3).

Synergies between Binomial and Multinomial processes/probabilities/coefficients

Since each diagonal entry is the variance of a binomially distributed random variable, the variance-covariance matrix is defined by:

For instance, suppose we have 9 people arriving at a meeting according to the following information:

Suppose we roll 10 loaded hexagonal (6-face) dice 8 times and we are interested in the probability of observing the event A={3 ones, 3 twos, 2 threes, and 2 fours}. Assume the dice are loaded to the small outcomes according to the following probabilities of the 6 outcomes (one is the most likely and six is the least likely outcome).

Of course, we can compute this probability exactly: 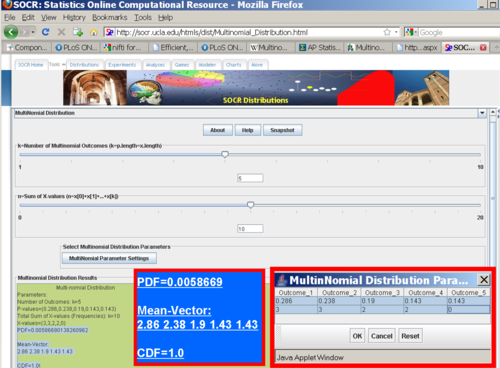 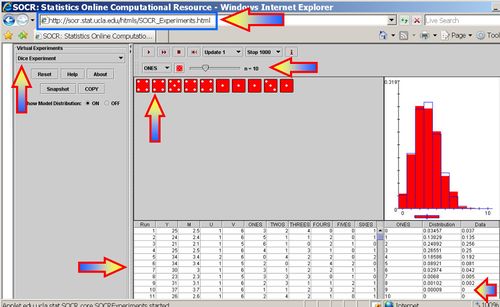 Note that this approximation is close to the exact answer above. By the Law of Large Numbers (LLN), we know that this SOCR empirical compared to the exact multinomial probability of interest will significantly improve as we increase the number of trials in this experiment to 10,000.